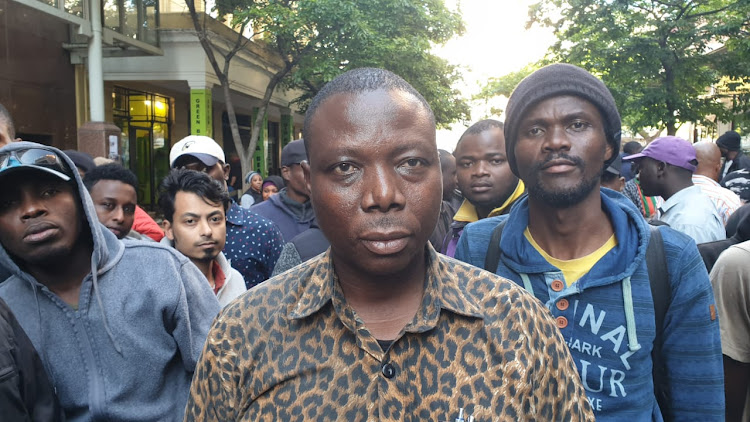 Community leader Jean Pierre Balous says the foreigners will continue to occupy Waldorf Arcade until hundreds of refugees are given safe passage out of the country.
Image: Dan Meyer

“They are killing us. They are making it impossible for us to live in peace.”

Since last week, hundreds of foreigners from across Africa have occupied Waldorf Arcade, in Cape Town's CBD, where the UN's refugee agency is based. The shopping centre is strewn with makeshift sleeping areas, cardboard boxes and food.

According to Jean Pierre Balous, the leader of the group petitioning for safe passage out of the country, they intend to remain there until they receive support from the UN.

“They are killing people without any concern. They know that their government is supporting them,” he said.

Rhetoric from President Cyril Ramaphosa and police minister Bheki Cele has invigorated a divisive sense of hatred among South Africans towards foreigners, he said.

“We are not going anywhere. The government has failed the refugees by not supporting us, and is actually increasing the discrimination.

“People fear for their lives. Ministers are still instigating violence against refugees. The government you count on to protect you is the same people who are causing you harm.”

He said refugees' rights to protection are being ignored by government and because of this they no longer want to discuss the issue with policy makers.

“The South African government is violating treaties they have signed. We have spoken to the head of the UN office. The only information they could provide is that they are dealing with the matter and they told us that they can only help so many people," Balous said.

“We are living in fear. We do not know when they will strike next,” says Ashley Johnson.
News
2 years ago

“As refugees we have rights to address and stand against the issues we are going through. The police cannot come and brutalise us.”

According to Balous, the city has commanded shops and businesses around the arcade to deny the refugees access to their ablution facilities.

A City of Cape Town official, JP Smith, told TimesLIVE it is on private property so the city cannot act unless the owner lays trespassing charges. "This is an issue now for national government and UNHCR."

UN high commissioner for refugees Filipo Grandi is in SA and has held talks with home affairs minister Aaron Motsoaledi, tweeting afterwards that he had pledged support for those affected.

“South Africa receives large numbers of refugees and migrants from the region and beyond. I have agreed with Minister Motsoaledi that co-operation between UNHCR and Home Affairs will be strengthened so we can work together to make South Africa’s asylum system more effective,” he wrote in a Twitter post on Monday.

In a statement on Tuesday morning, the UNHCR said it was engaging with community leaders to try to resolve some of the many issues faced by refugees, including the difficulty they face in getting paperwork delivered by home affairs.

“Grandi listened to their concerns, mainly linked to better access to documentation and information, the process to obtain refugee papers, as well as issues of personal security,” the statement read.

“I had a useful and constructive meeting with some refugee representatives today in Pretoria” said Grandi.

“I told them that UNHCR will continue to develop its dialogue with them, and that I will also discuss their concerns with the authorities during my visit in the country.”

The high commissioner encouraged refugees to continue to express their concerns in a peaceful manner.

The KwaZulu-Natal Provincial House of Traditional Leaders says issues of violence in SA should be solved at grassroots level and not by 'presidents ...
News
2 years ago

A man from Burundi, who has been in the country since 2004, said he can't get legitimate work because he is still waiting for documentation.

“Here in SA we cannot get the proper papers, I'm not even working. My kids are forced to take their mother's name because otherwise how can they get work?

He said foreigners are experiencing unprecedented violence at the hands of South Africans in townships.

“They will wait for us at home affairs when we go to collect our documents, they wait outside our stores,” he said.

He gestured to a large scar over his eye, telling TimesLIVE he was attacked by a group of men when he was walking home one evening.

“They said they would kill me because I didn't belong here. I want to ask them [the UN] to let me get out of here.”

He said the foreigners are “united as a community” and have been sharing food, blankets and sanitary products.

“The Red Cross offered us blankets and food, but we said that we can survive among ourselves.”

Hundreds of refugees remained outside the offices of the United Nations High Commission for Refugees (UNHCR) in Cape Town on Wednesday, after ...
News
2 years ago

After winning over a hostile crowd at Robert Mugabe's funeral in Harare last week by graciously apologising unreservedly for the senseless xenophobic ...
Opinion & Analysis
2 years ago