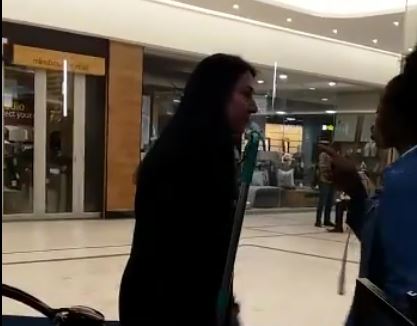 The 'abusive' owner of the Nail Me salon at Eastgate Mall has been slammed for the way she treats her staff.
Image: Screengrab/Facebook

Eastgate Mall management has condemned the "abusive" behaviour of an upmarket salon boss towards staff members.

Her actions were captured in a series of video clips taken at the "Nail Me" salon on Tuesday. The videos caused an uproar on social media, with calls for the salon to be shut down.

In one of the videos, a woman - believed to be the salon owner - can be seen asking a female staff member where she's been. She responds that she went to the toilet, and the woman then asks why it took between 15 and 20 minutes.

Moments later, the woman closes doors at the salon before walking toward staff members shouting.

"F**k, everybody, stop everything you’re doing … " she can be heard saying.

In another video, the manager is seen speaking to a different female staff member.

"Who do you think you are? How dare you scream at me like that. Get out," she shouts.

The staff member calmly responds with, "I didn’t scream to you," before taking off her apron.

Moments later, the livid manager is seen walking around, shouting, "Get out, get out. Go shout at your f***ing mother, not me."

Eastgate Mall spokesperson Alana Hoskin condemned the incident, which she said did not reflect the values of the centre.

"As the centre, we do not condone the incident. The owner of the store is getting legal advice on the matter," she said.

Hoskin confirmed that the store remained closed on Wednesday, but the centre continued to operate as normal.

A number of people have written reviews of the salon on Facebook, many of which also highlighted the alleged abuse of the owner.

In February this year, Siphesihle Sithole detailed her experience at Nail Me.

"Worst experience of my life! The owner is rude towards customers. I walked out without paying because she had called me funny names and swore at me. The lady got infuriated when I asked her why can’t I drink my soda in the shop. She told me to get out," wrote Sithole.

Meanwhile, Dianne Bayley took to Twitter to express outrage at the incident.

Managers who claim credit for their employees' work and favour some over others are being hauled over the coals in a new workplace survey.
News
2 years ago

Employees at a Shoprite supermarket in Southgate, Johannesburg south, want justice after allegedly being called "lazy k***s" by a regional manager.
News
2 years ago

Telling your boss to 'f**k off' not okay, even if he swears: CCMA

What do you get for hurling a barrage of F-bombs at your boss? Sacked of course‚ and in the case of accounts consultant Lee Ann Kruger three months’ ...
News
5 years ago