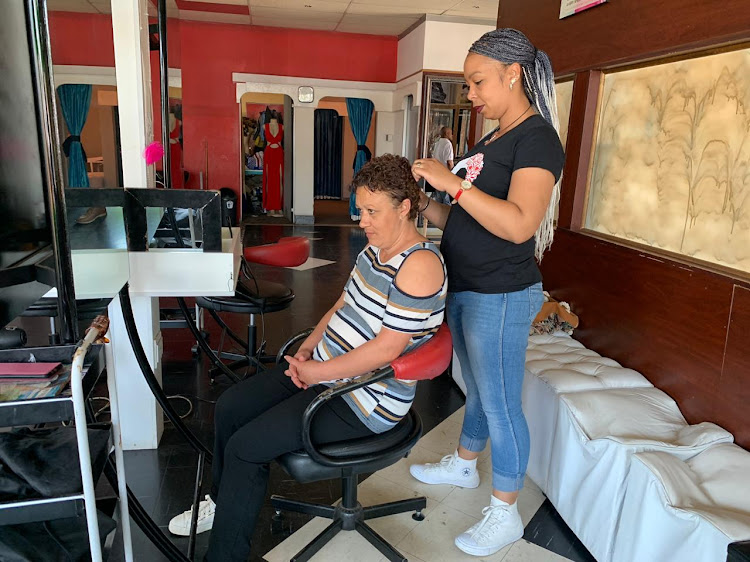 Employees Netheley Amaral and Leeanne Cornelius from Tiffany’s Hair Salon in Sophiatown, Johannesburg. Owner Aubrey Forbes said it was painful to see her 'money walk out the door' during Eskom's load-shedding on Wednesday.
Image: IAVAN PIJOOS

It was short notice. There was no way to prepare for it and that's what makes it frustrating.

This is what several Johannesburg business owners and residents had to say about Eskom's implementation of enforced power cuts nationwide, which it referred to as stage 2 load-shedding, on Wednesday morning.

"There is no contingency plan that we can put into place to help us. It is also very difficult to have staff here that you have to pay and there is nothing happening for the day," Aubrey Forbes, owner of Tiffany's hair salon in Sophiatown, told TimesLIVE.

The utility, which supplies 95% of the country's energy needs, said in a statement that the electricity system had been severely constrained this week.

"As a result of the loss of additional generation, delays in the return to service of units that are on planned maintenance, and limited diesel supply, it has become necessary to implement stage 2 rotational load-shedding from 9am until 11pm in order to protect the power system from total collapse," the power utility said.

The city of Cape Town said it had been able to mitigate the cuts and had implemented only stage 1 load-shedding.

On Wednesday morning traffic lights were out and several businesses were forced to close shop in Sophiatown, Johannesburg, and surrounds.

Unlike larger businesses such as Shoprite and KFC, which use generators, hair salon owner Aubrey Forbes and his employees sat around chatting to kill time until electricity was restored.

"We are so reliant on electricity. If we were informed, we could have made alternative arrangements," said Forbes. "We didn't expect this at all. I don't really know what this holds for businesses like ourselves."

Forbes said he had to turn six customers away.

"In the mornings we have an influx of customers, but today we had to turn them away. It's totally unprofessional and painful as a business owner.

"The landlord expects his rent and we need to pay staff, but now your money is walking out your door and you can't do anything about it."

Forbes called on the government to explore other avenues to prevent future load-shedding.

Nearby, some men opted to cut their hair under a gazebo at a local street barber who uses a car battery for power.

A self-employed kitchen interior designer, Alberic Bentley, told TimesLIVE that he heard about the planned load-shedding only an hour before it went off.

"I feel very disappointed that the power just went off. Now I literally just sit and do nothing. No power means I can't work," Bentley said.

Imrah Ullah, who owns a clothing store, said not one customer came to his shop on Wednesday morning.

"They walk past and see there is no power and don't even bother coming in. I didn't even make R1 today."

His brother Waheed Ullah, who owns a cellphone repair and printing store next door, said he had to turn customers away.

As an example, he said: "One customer came in and wanted to print important documents but we had to turn him away and told him to come back after an hour. We can't work on mobiles or do screen changes when there is no electricity.

"If the government wants businesses to run smoothly, they should have remedies for power outages. Business is the backbone of the economy."

Eskom chiefs 'refuse to be screened' by State Security Agency

One hundred senior officials at troubled power utility Eskom are refusing to undergo security vetting processes of the State Security Agency, as ...
Politics
2 years ago