Long-term imprisonment and reformative programmes can save Nicholas Ninow: lawyer 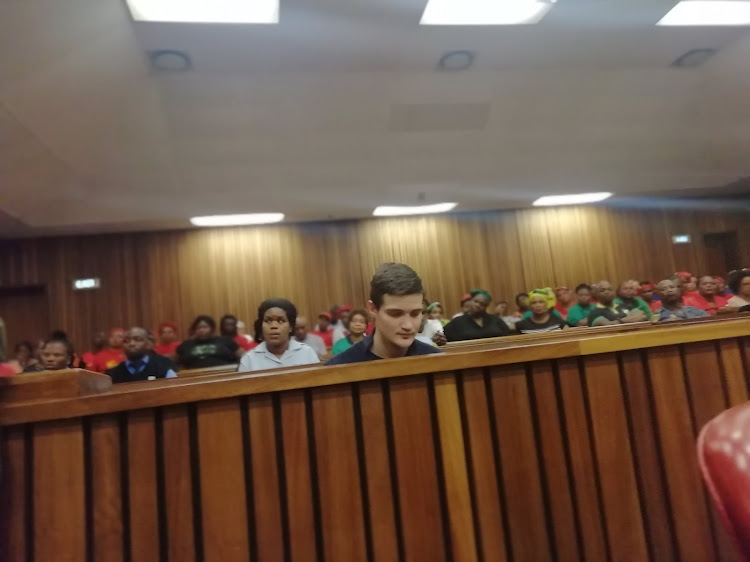 Nicholas Ninow's lawyer says the damage caused by his mother did not disappear.
Image: Nomahlubi Jordaan

Convicted rapist Nicholas Ninow's lawyer has pleaded with the Pretoria high court to impose a lesser sentence  than life imprisonment on him.

Ninow admitted to raping a seven-year-old girl at a Dros restaurant in Pretoria in September 2018. The self-confessed drug addict on Wednesday presented himself as a broken man who suffered from anger issues and depression. His grandmother, Pauline Gericke, testified that Ninow was a different person when he was on drugs. He became angry, delusional and displayed signs of being a maniac, Gericke said.

His lawyer, Herman Alberts, told the court on Thursday that Ninow's personal circumstances and background were "highly unusual".

“You have a mother introducing her son to drugs. The damage done by the mother did not disappear,” Alberts argued.

“I have to concede he committed a very serious offence, but life imprisonment is an extreme sentence.”

Convicted rapist Nicholas Ninow was sexually abused as a child, a psychologist told the Pretoria high court on Wednesday.
News
2 years ago

He said a long-term prison sentence and reformative programmes could save Ninow.

“The accused is not a person who decided to act antisocial, to experiment with drugs. He was exposed to drugs. He needs to be reconsidered in a different footing,” Alberts argued.

He contended that Ninow acted irrationally when he raped the child.

Prosecutor Dorah Ngobeni, however, argued that Ninow had not showed remorse.

“The accused did not tender a genuine plea. That is why the state rejected it.”

She said Ninow concealed evidence from the court and did not take it into his confidence.

“The accused should have taken full responsibility for what he did and taken the court into his confidence.”

Ngobeni argued that drugs and alcohol should not be accepted as compelling circumstances.

She questioned how he managed to keep the child in the toilet cubicle without her making a noise. “This shows that he planned to rape the child.”

Convicted Dros rapist Nicholas Ninow was sentenced in the Pretoria high court on October 17 2019. Judge Mokhine Mosopa sentenced Ninow to life in prison for the rape of a seven-year-old child in September 2018.

Convicted rapist Nicholas Ninow has told the court that he started using drugs with his mother at a young age.
News
2 years ago

Rapist Nicholas Ninow's grandmother Pauline Gericke said on Tuesday that he was a good boy who played sport and was loved by many when he was at ...
News
2 years ago

IN QUOTES | Nicholas Ninow on Dros rape: 'I'll never be able to fix what I did'

Dros rapist Nicholas Ninow has apologised to his family and the child he raped at Dros restaurant in September 2018.
News
2 years ago