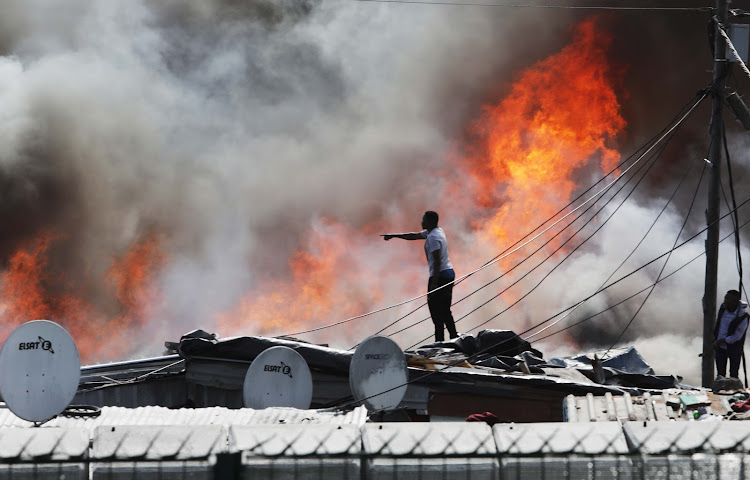 A resident of the Vygieskraal informal settlement watches as a blaze engulfs hundreds of homes on Monday afternoon.
Image: Esa Alexander/Sunday Times

Two people, one of them a four-year-old girl, died in a fire in Cape Town on Monday that left 1,200 residents displaced.

Fire and rescue services responded to the rapidly spreading blaze at the Vygieskraal informal settlement about 3pm on Monday. By the time it was extinguished at 7.30pm, it had engulfed more than 300 structures.

"A strong southwesterly wind was fanning the flames and additional resources were called upon," said the city's Jermaine Carelse, adding that 12 firefighting appliances, a rescue vehicle, a specialised vehicle and 48 staff members attended the scene.

“While clearing the debris, two bodies were discovered burnt beyond recognition,” he said.

Police spokesperson Capt FC van Wyk confirmed the child's death, and said that a case of arson had been opened.

"After the fire was extinguished, the body of a four-year-old girl and another unidentified body was discovered," he said. "A case of arson and an inquest was opened for investigation."

Gift of the Givers, official partner to Cape Town Disaster Management, was immediately on site when the call came from the city and has pledged support for the victims,  offering tents, blankets, hygiene packs and non-perishable food, among an assortment of other items to help in the relief efforts.

“It was a long, tough night as strong winds necessitated the call up of additional fire fighters to combat a raging fire at Die Vlei," said spokesperson Imtiaz Sooliman

"Unfortunately, 325 informal dwellings were destroyed, while 1,200 people were displaced. Desperate victims were taking huge risks to retrieve important documentation and what little they could of their life's possessions in yet another tragic fire in an informal settlement," he said.

Butterworth police on Friday called for help in identifying two people who were found burnt to death in a shack.
News
1 year ago

The Pietermaritzburg landfill that caught alight last week, leaving the city shrouded in smoke, is on fire again
News
1 year ago

Over 200 shacks and around 900 people were left homeless when a fire swept through an informal settlement in Kempton Park on Monday evening.
News
1 year ago