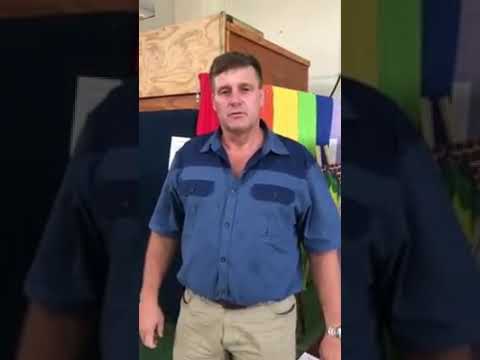 A video in which a Richards Bay pastor lambastes a KwaZulu-Natal north coast school for allowing a matric pupil to display his "satanic" artwork went viral on Monday evening.

In the video, Andrew Anderson said he was horrified when he attended a school function and saw on display a pupil's work which he believes is blasphemous.

The pupil's art work includes sculptures of heads with horns, paper mache using bible pages and paintings which reference The Last Supper and The Creation of Adam. Some of the paintings use a character who is similar to Ronald McDonald.

Anderson said it was unacceptable for the young artist to replace "a clown with Jesus in the Last Supper painting and to make sculptures out of ripped pages of the Bible" displayed at Grantleigh College.

The school is an independent Curro school.

Anderson told TimesLIVE on Tuesday morning that his two daughters had already matriculated from the school and that it was his youngest daughter's last official day before exams on Monday.

"That should tell you how long I have been associated with the school. I am shocked and horrified by what I saw yesterday," he said.

In the video, Anderson called on Christians to protest at the school.

He told TimesLIVE that he would release information on the protest later on Tuesday.

Anderson said he did not know the artist personally and that he did not believe that the social media outcry would affect the schoolboy's mental health or upcoming exams.

"In fact, the social media outcry will only promote his work more," he said.

Anderson said after he viewed the artwork, he met the principal before posting the video.

"I was not happy with what was said to me. I did not like the attitude," he said.

In a statement on Tuesday, the school's executive head Andrew Norris said he was aware of the social media outcry.

He confirmed that the video referred to one of the matric pupil's final art projects.

"The project filmed and featured is part of a final submission to the Independent Examination Board and was displayed in the school foyer as part of a year-end exhibition," he said.

"The matter is currently subject to an internal investigation. We want to reiterate that comments made are not an accurate reflection of our school and the situation referred to and we reserve our rights in this regard."

"Curro welcomes all comments that are constructive and contribute to discussions in a meaningful manner. However, we do not condone cyber bullying, religious intolerance, hate speech, derogatory language, misrepresentation and comments reflecting negatively on our brand on any social media pages," he said.