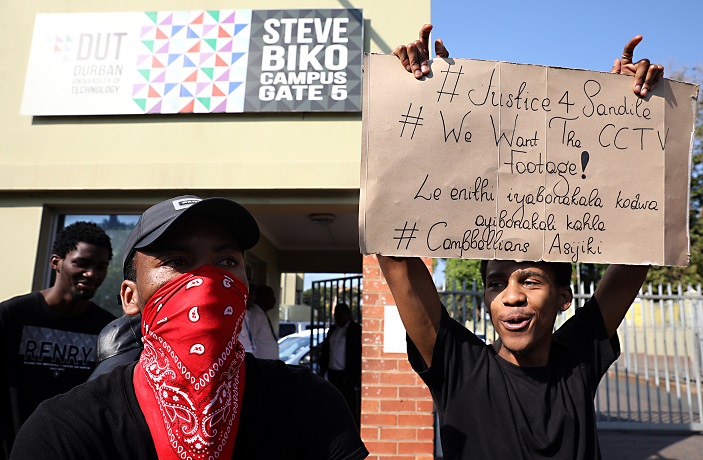 Durban University of Technology students protest outside the campus after Sandile Ndlovu was stabbed to death.
Image: Sandile Ndlovu

The family of slain Durban University of Technology (DUT) student Sandile Ndlovu are not getting their hopes up ahead of the appearance in court of the man accused of killing him.

Family spokesperson Tshepo Mokoena, Ndlovu’s uncle, told TimesLIVE on Wednesday that a report from the investigating officer differed from an official comment released by the police, which made them anxious.

He said the investigating officer told them the suspect had been denied bail and remanded in custody, but police said he was yet to appear in court.

Police have arrested a man in connection with the murder of DUT student Sandile Ndlovu in September.
News
1 year ago

“It's not that we are suspicious of anything; it's just that it won't be nice to reopen the wounds only for this person to walk. We are just praying that it is the right suspect and that they have followed the right protocols and channels for the person to be charged,” he said.

Police confirmed on Wednesday that a 29-year-old man was arrested in Pinetown in connection with Ndlovu’s death. He was found in possession of Ndlovu’s phone and a knife.

Ndlovu, a first-year industrial engineering student from Mpumalanga, was fatally stabbed in a lecture room at the university’s Steve Biko campus on September 16. After a week in intensive care in hospital, he succumbed to his injuries.

Mokoena said the family found out about the arrest on Tuesday on social media, through an Economic Freedom Fighters SRC page.

“To be honest, the stories are conflicting - so we await to hear from the magistrate and also for whomever [else] to speak up. [Considering] the way it happened and the conflicting statement, we just hope that this was not an arrest for the sake of arresting someone," he said.

"We will be happy once judgment is given and obviously once this person is proven to have done this thing.”

The suspect is expected to appear in the Durban Magistrate's Court on Thursday.

Slain DUT student to be buried in his home town

Slain Durban University of Technology (DUT) student Sandile Ndlovu left his home in Mpumalanga with hopes of returning in a graduation gown but ...
News
1 year ago

Stellenbosch University is investigating claims that a man had to be hauled out of the library commons on campus after he was allegedly caught ...
News
1 year ago