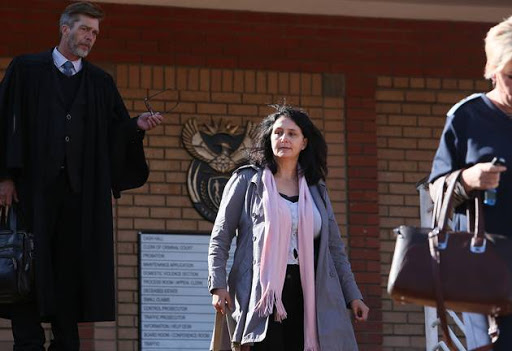 Estate agent Vicki Momberg is "on the run" from police.
Image: Alon Skuy

Momberg has been ducking the police since the issuing of her warrant of arrest on 1 August, police's provincial spokesperson Brig Mathapelo Peters told Sunday Times.

Momberg's relative, who spoke on condition of anonymity, told Sunday Times that she is staying at her parents' house in Krugersdorp, where police and the publication had looked for her twice.

A video of Momberg using the k-word more than 40 times while speaking to officers and 10111 operators went viral in 2016 and prompted investigations by the authorities. This saw her later become the first South African to receive a two-year jail sentence for crimen injuria.

The news of her disappearance soon spread to social media where users urged each other to lock their doors and stay inside for fear of running into her on the street.

Others jokingly joined the search for Momberg, speculating on where she could be hiding.

It's almost lunch time. Keep your eyes open at every Tashas in Joburg, Vicki Momberg will pop up eventually.

#MostWanted Convicted Racist #VickiMomberg. She is on the run. Anyone with information, call @SAPoliceService Crime Stop on 08600 10111. #MostWantedVickiMomberg do Not try Apprehend She Could be Armed .

#VickiMomberg skipped the country. Our intelligence tell us she is hiding in another country called Orania. Unfortunately #Orania government can’t extradite her as the two countries have no Extradition Agreement.

So convicted racist Vicky Momberg is apparently “on the run” from the cops to evade imprisonment.

And no one from the Police bothered to check the Soweto marathon - where all the runners were today pic.twitter.com/z248A6Mybh

Vicki Momberg is in Australia pic.twitter.com/ZbeAFFabvN

Racist real estate agent Vicki Momberg is “on the run”, according to police, even though she has reportedly been staying at her parents’ Krugersdorp ...
News
2 years ago

Convicted racist Vicki Momberg was cool, calm and collected as the Johannesburg High Court dismissed her appeal against her conviction and sentence ...
News
2 years ago

Vicki Momberg has lost her application for leave to appeal her conviction and sentence.
News
2 years ago

Here are four stories you need to read on Vicki Momberg.
News
2 years ago