Four coal trucks were torched near an Eskom power station in Mpumalanga on Monday evening.

He said one of the drivers was forced out of his truck by an unknown man who accused him of working while others were on strike.

The trucks were queuing on the Wonderfontein road on their way to deliver coal to the power station.

“ It has not been established whether the four trucks found burning at Arnot were set alight individually or only one truck was set alight and the rest caught fire as a result,” Hlathi said.

He said the damage was estimated to be in the region of R5m.

Cases of malicious damage to property were opened.

Eskom said three trucks had been torched close to the power station. A fourth truck was torched near Matla mine.

The power utility confirmed that two truck drivers were assaulted near the power station.

“The sporadic interruption of coal delivery by trucks does not have an immediate impact on the coal status at both Arnot and Matla.

“Should the interruption intensify or spread over an extended period it may affect the healthy stock level,” said a spokesperson for Eskom.

In a separate incident on the same evening, a truck driver was sleeping in his truck in Hendrina when an unknown man broke his window. He was surrounded by seven other men and ordered to get out.

“One of them took out a box of matches and set his blankets, which were in the truck, alight.” 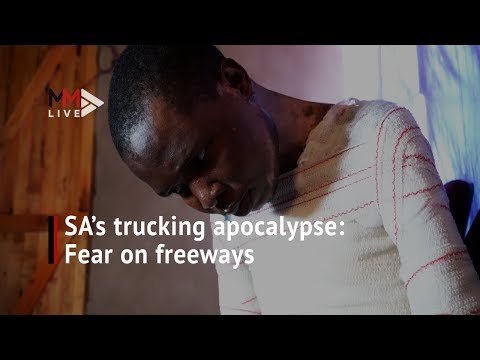 DA MP Kevin Mileham said in a statement on Tuesday that there had been ongoing violent protests at two coal mines in Mpumalanga.

He said the Truckers Association of SA (Tasa) had been drawn into the conflict.

Mzimkhulu Mining and SG Coal had since approached the high court to seek an urgent interdict against Tasa.

Mzimkhulu Mining's directors include Eskom board chair Jabu Mabuza's brother-in-law, according to the Sowetan. The publication reported that the company was losing R8m a day in revenue due to violent protests at its mine in Mpumalanga.

The mine accused some truck owners of intimidation and damaging property.

The DA called on mineral resources and energy minister Gwede Mantashe to intervene immediately, before the ongoing unrest had serious consequences for Eskom.

“The unlawful actions also result in non-fulfilment of contractual commitments towards Eskom. The mine had to shut down for the day because nobody was allowed access,” Mileham said.

President of Tasa Mary Phadi could not be reached for comment.