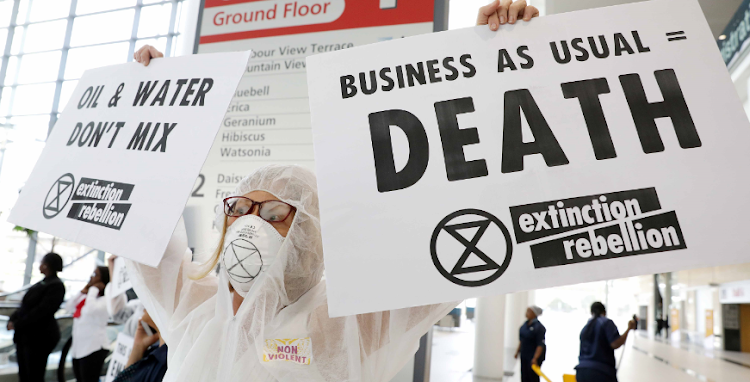 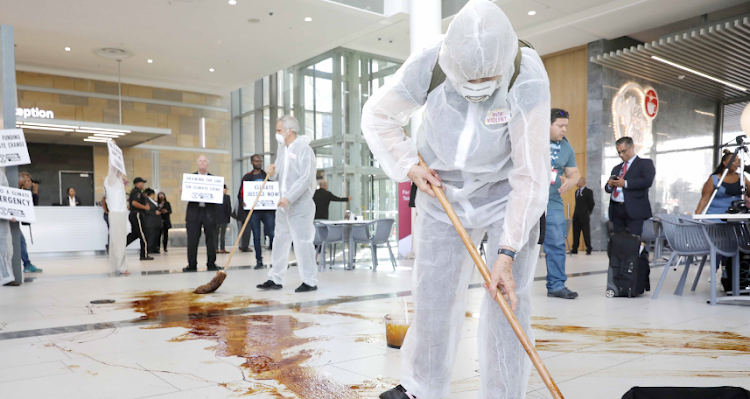 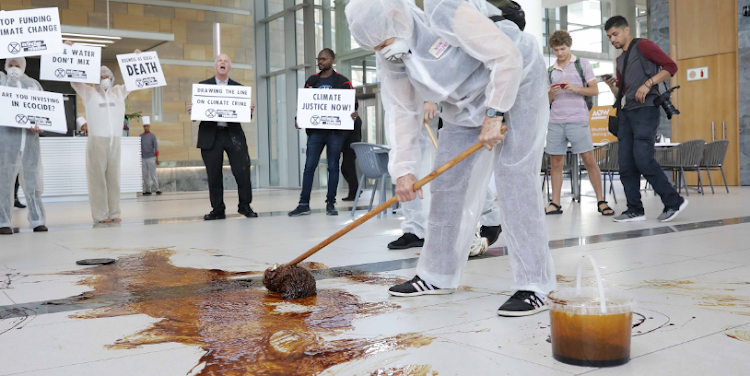 At 8:20am on Tuesday, a man in a grey suit began pouring “blood” in protest across the lobby of the Cape Town International Convention Centre (CTICC), the venue for the Africa Oil Week conference this week.

A protester, Andrew Park, said the goal of the protest was to bring to public attention what was happening at the conference. “Making deals that perhaps they think is good for the economy, perhaps they think they’re doing good. But, at the end of the day, it’s harming the world’s most vulnerable people.”

According to its website, at Africa Oil Week Africa’s most senior exploration and production stakeholders “come to set out the future direction of the continent’s upstream oil gas sector, secure major deals and lucrative new partnerships”.

More than 25 ministers will attend the conference, which features over 200 speakers, including Western Cape Premier Alan Winde and Director-General Thabane Zulu of the department of energy.

Wolf told GroundUp: “We believe that the general public is not aware of the gravity of the decisions which are possibly going to be taken at the Africa Oil Week. The type of deals that are being discussed at the conference will have a major impact on our future.”

“With our protest we’d like to shine a spotlight on this ‘business gathering’ and send out the message that we’re watching them. Hopefully we can make it a bit harder for climate offenders to do their business as usual. We also demand from our politicians to declare climate emergency and categorically oppose any future oil and gas developments which will be negotiated at this conference.”

Another protester, Peter Benjamin, chanted: “Climate criminals, we’re watching you, history will be judging you!”

Extinction Rebellion Cape Town released a media statement saying, “The conference organisers have omitted even the faintest reference to climate change in their programme, which is inconceivably irresponsible considering the severity of our ecological situation.”

“In our global fight to avert a climate catastrophe, we demand from our elected politicians, honourable Minister Gwede Mantashe and Premier Alan Winde, to make an open statement at the Africa Oil Week declaring a climate emergency and withdrawing any support to climate criminals who are complicit in the demise of our planet.”

“Further, we demand from the government of Western Cape and of South Africa, to tell the truth to their people by declaring a climate emergency, to implement emergency measures to combat climate change, to abandon and ban all planned projects in fossil fuels, to oppose fracking in the Karoo, and to oppose offshore Brulpadda field development.”

Africa Oil Week organiser Joanna Kotyrba commented: “Africa Oil Week is a platform that brings together stakeholders from across the oil and gas value chain to discuss and debate the most important issues facing the sector, including how technology and innovation with deliver energy responsibly for a sustainable future.”

“The global transition to cleaner energy sources and renewable energy technologies will be discussed on Wednesday 6 November. The session will explore what government, industry, consumers and others are doing to prepare for the energy transition. The role of gas as a transition fuel for developing countries and the overlaps between capacities for the oil and gas sector and those needed in the energy transition space – amongst other topics,” said Kotyrba.

Following the protest, staff from CTICC began mopping up the floor. The sweet smell of molasses lingered in the air.

Wolf spoke with police. He told GroundUp he would be charged with trespassing.

South African youth take to the streets over climate change

Hundreds of youths in Cape Town and Pretoria marched on Friday to demand that the government urgently act on climate change.
News
1 year ago

About 1,500 people marched to the Gauteng Legislature on September 20 2019. The march took place in conjunction with a global climate change strike.
News
10 months ago
Next Article

"No tears for trash": Ceramics as a response to gender-based violence
"This is an extension of who I am": Woman film director changing the narrative
X