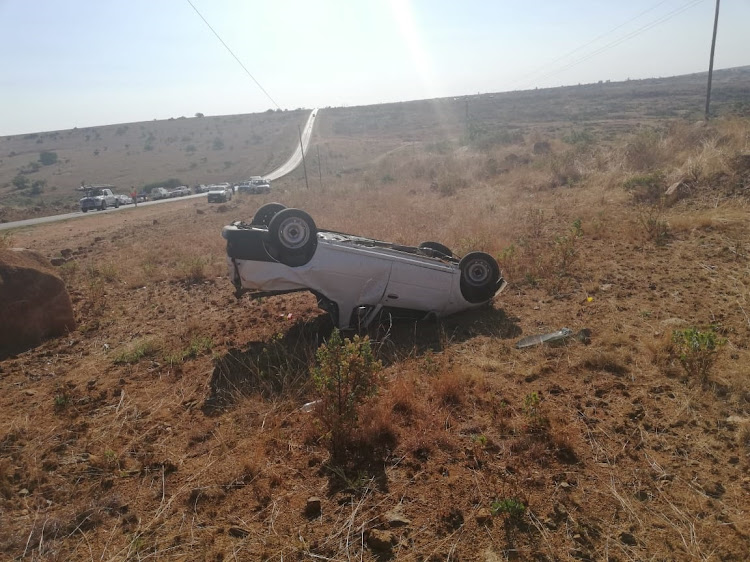 The five pupils are believed to have caught a lift with the driver of this vehicle, which overturned when he lost control.
Image: Supplied

The Limpopo education department was reeling on Tuesday night after five pupils died in a crash earlier in the day.

All were from the AM Mashego Secondary School, south of Polokwane.

Police spokesperson Brig Motlafela Mojapelo said the female pupils were allegedly hitchhiking next to a filling station when they were given a lift.

The driver of the Nissan NP200 bakkie lost control when approaching the Matrompi Bridge on the R574 between Groblersdal and Mpudulle.

“It rolled several times, instantly killing the five learners and critically injuring the driver and his crew. The injured were taken to hospital,” Mojapelo said.

A case of culpable homicide was opened.

Education MEC Polly Boshielo expressed her deepest sorrow and devastation after hearing about the accident.

“The department learnt today [Tuesday] that the learners, four in grade 10 and one in grade 9, met their untimely death ... after hiking a lift to take them home,” the department said in a statement.

Sending her condolences to the families, Boshielo said: “We are deeply saddened. Our hearts are heavy and we accordingly send our deepest heartfelt condolences to the families of our learners and the school community. This is a very difficult time for all of us, friends and relatives of these learners. We lack the necessary words at this point in time. We must be united in this time of grief.”

Five people were injured in a multi-vehicle collision, in which a car burst into flames, on the M19 highway between Durban and Pinetown on Tuesday
News
2 years ago

Four people were killed and eight others injured in a collision between a truck and a bakkie on the M70 towards Henley Dam near Pietermaritzburg on ...
News
2 years ago

Ten people were injured when two vehicles collided on the M41 opposite Cornubia Mall north of Durban on Sunday morning.
News
2 years ago

Man killed, five injured in collision on R59 near Vereeniging

A man was killed and five others were injured, including four children, when two vehicles collided on the R59 between Vereeniging and Vaalpark on ...
News
2 years ago