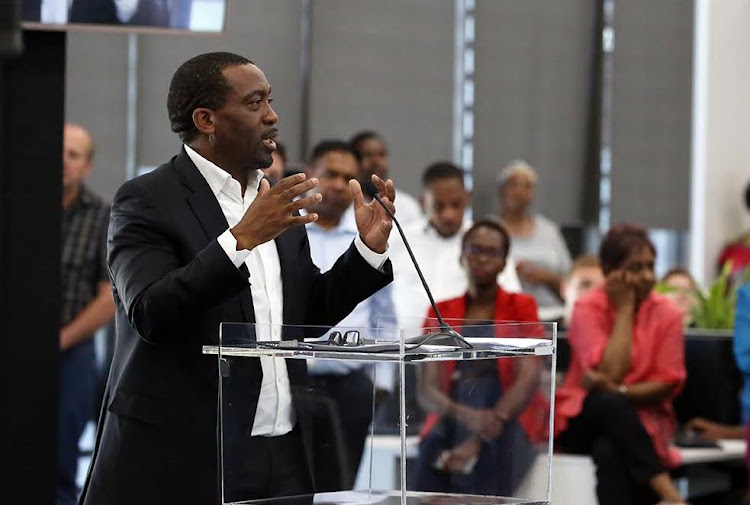 Lebashe Investment Group chairman Tshepo Mahloele on Wednesday unveiled the new name of the company that will house the media assets it bought from Tiso Blackstar for R1.05bn.

The new company will be called Arena Holdings, Mahloele said in an address to staff at their offices in Parktown, Johannesburg.

He said he believed the media was everything but a dying business.

“We are in it for the long haul. We want this new entity to focus solely on protecting and building our current media assets in SA, grow the media business across the African continent and, to help our businesses to effectively navigate industry changes that are brought to bear by digital disruption and other market forces,” he said.

Mahloele said there were no plans to change the current management of the company but would be constituting a new board in the near future for Arena, which he would chair.

He announced that BizNews publisher Alec Hogg would be a consultant to the business.

The company will continue under the leadership of managing director Andy Gill and his deputy Moshoeshoe Monare.

The founders of Lebashe Investment Group are Mahloele, Jabu Moleketi and Warren Wheatley.

The unveiling of the new name comes after Tiso Blackstar Group announced in June it had sold its print, broadcasting and content businesses in SA, Ghana and Kenya to Lebashe Investment Group for R1.05bn.

Lebashe is an unlisted investment holding company focusing on financial services and ICT, among other things. The company has grown significantly since its inception and holds stakes in a number of well-known businesses, such as Capitec, EOH and RainFin.

The transaction received the nod from the Competition Tribunal of SA and Tiso Blackstar Group SE shareholders in the UK last month.

Tiso Blackstar Group, the publisher of TimesLIVE, the Sunday Times and several other media titles, has sold its print, broadcasting and content ...
News
2 years ago