WATCH | 'I saw victory in their eyes': Cyril Ramaphosa as Boks kick off golden trophy tour 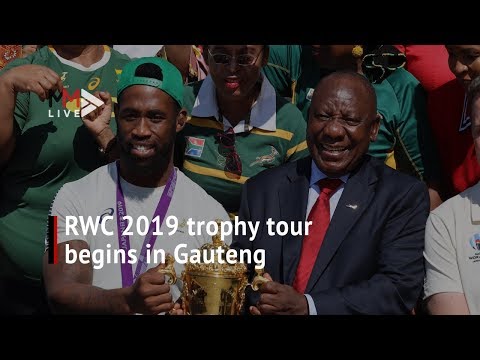 #StrongerTogether — that's the slogan that brought the coveted Webb Ellis trophy home. The Springboks kicked off their trophy tour in Pretoria early on Thursday morning.

Fans arriving hours before their arrival cheered, danced and sang for hours before laying eyes on the golden trophy.

Captain Siya Kolisi and his team arrived in style, filling up the “Rugby World Cup champions” Mercedes tour bus. President Cyril Ramaphosa, along with members of cabinet, welcomed the champs alongside dozens of South Africans at the Union Buildings.

Ramaphosa shared sentiments from the day of the victory, telling the crowd the team claimed to be nervous before the game. The president said he knew the champs were lying because he could see “victory written all over their eyes”.

The tour moved to Johannesburg and will continue around the rest of SA for the next few days.