Bok fan Cheryldene Schouw of Bonteheweul was so adamant about attending the team’s trophy tour in Cape Town on Monday that she quit her job as a crèche teacher when her boss refused to give her a day off.

“I wouldn't miss such a golden opportunity to see our national team and my favourite captain, Siya Kolisi. I said: ‘It’s okay if I can't have the day off, then I'm out of here'.

“I don't mind not having a job. Today means so much for me. There will be other job opportunities," she said. 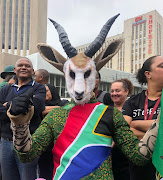 Image: Kimberly Wipfler Caleb Ornella was dressed in a full springbok hat crafted by his wife, Esther Ornella, who is a fashion designer.

Her enthusiasm was shared by Capetonians singing and dancing in the streets to celebrate the Boks’ World Cup win with their heroes.

Monday marks the last leg of the nationwide tour after their victory in Japan.

Hundreds of Capetonians lined major streets in the CBD such as Darling, Adderley, Wales and Strand to salute them.

When the green Springbok bus emerged from the city hall, with captain Siya Kolisi holding the cup aloft, the crowds went beserk, singing and dancing.

Chants of “Siya, Siya, Siya” rang out. Some shouted “Mapimpi” and broke into impromptu songs about the players.

David Darling of Oranjezicht was celebrating with his three children, Kate, 11, Nicholas, 10, and Lucy, 8, all pupils at St Cyprian School.

Image: Sipokazi Fokazi David Dalling of Oranjezicht was celebrating the Bok victory with his three children, Kate, 11, Nicholas, 10, and Lucy, 8, all pupils at St Cyprian School.

He decided to bring all three to experience this "nation-building celebration”. He said none of his children was born when the Springboks brought the World Cup home for the second time in 2007.

“I was part of the celebrations back then, but I didn't have children. I couldn't let them miss such a great opportunity. I want them to experience history being made. They won't get what they are getting here in class even if they are taught about it,” he said.

Bevan Kruger from Namibia, who is on holiday in Cape Town, extended his trip to see the Bokke and was in the CBD as early as 6am for this “once-in-a lifetime opportunity”.

“After I heard they would be finishing off their tour here, I had to extend my stay. I love the team and I wouldn't miss such an opportunity. Not in the world.”

He joked about being disappointed not to see Faf de Klerk in his Speedo on the overcast day.

“We all said it is cool that he was going about in the change room in his Speedo. I was hoping to spot him in it again, but maybe it wouldn't be appropriate for today's occasion,” he said.

Even the littlest fans came to show their support!! #Springboks @TimesLIVE pic.twitter.com/pzc6YRvD2L

Fan Caleb Ornella, dressed in a Springbok hat crafted by his fashion designer wife Esther, told Kimberly Wipfler that the hat was a hit when they watched the match at the Waterfront.

“Everyone was really excited to have a real-life mascot there, a real springbok. They didn't want him to leave. They said he was good luck,” Esther Ornella said.

Said hubby Caleb: “Everyone there was loving it. And I got to celebrate with other fans with an African, traditional Zulu dance when they won,”

Image: Margaret Connolly Lukho Maqashu with friends and school pupil Mujahida, 14, who got to miss school for the parade. Maqashu was dancing in the streets, amusing waiting fans by telling them the Boks had just called and told him they were on their way

She said, “It's great to experience all races, colours, cultures and beliefs coming together as one nation to cheer the boys on."

Nonjongo Smoki, who works for the Western Cape government, said when employees were given an opportunity to join the celebrations, she had grabbed it with both hands.

“This is really a special time for the country. For once we are celebrating in unison for one common goal. Today is one of those days that we will always remember as a nation, and it feels good to be part of it,” she said.