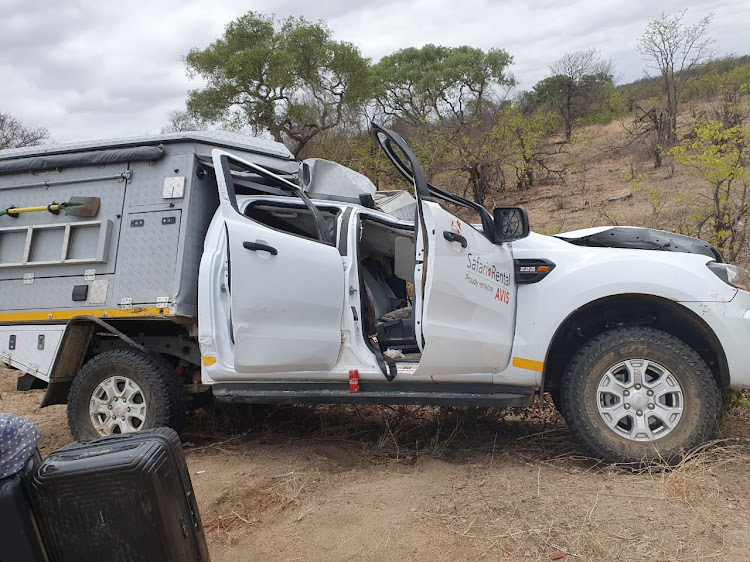 A Swiss man was seriously injured when a giraffe fell onto his car in the Kruger National Park on Sunday. The animal reportedly ran into the road, directly into the path of a taxi.
Image: Supplied

The Swiss tourist who was critically injured when a giraffe fell onto his vehicle in the Kruger National Park has been taken to a Johannesburg hospital, where he is in a critical condition.

SA National Parks (SANParks) spokesman Ike Phaahla said on Monday: “The last update was that he was still in a critical condition and that he had been transferred.”

On Sunday morning, the giraffe stepped into the road, into the path of an oncoming kombi carrying 13 day-passengers. The giraffe then fell on top of the rented safari vehicle the Swiss man was driving.

Four people were injured in the incident. The giraffe died on impact.

A giraffe caused an accident involving two vehicles after stepping into the road in the Kruger National Park on Sunday morning.
News
2 years ago

“Indications are that a giraffe stepped into the road and the taxi could not avoid hitting it. The animal fell on top of a rental safari vehicle,” said SANParks.

"The driver, a Swiss national, was seriously injured and the passenger [in the safari vehicle] suffered minor injuries. Medical personnel stabilised him at the scene before airlifting him to hospital."

The other two injured people were in the taxi. They suffered minor injuries.

Phaahla said police, who were on the scene, would conduct an investigation into what led to the accident.

"SANParks continues to warn visitors to the KNP to observe the speed limit and be careful on the roads,” he added.

A man who intended to illegally hunt wildlife inside the Kruger National Park two years ago was sentenced to an 18-year prison term after being found ...
News
2 years ago

A video of a tourist getting out of his car to get closer to a pride of lions in the Kruger National Park has gone viral.
Lifestyle
2 years ago