WATCH | Cape Town's Sistaaz are doing trans rights for themselves 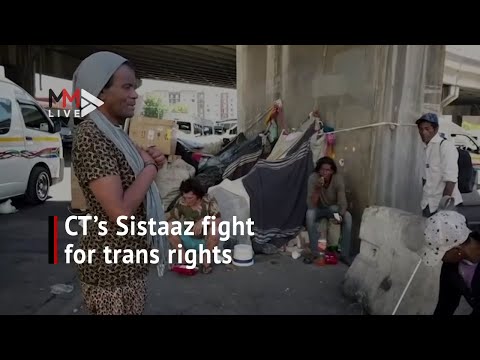 From a network of blankets strung together under a bridge in Cape Town, a group of homeless, transgender sex workers are fighting for equality, and a growing voice is emerging.

These are the Sistaaz of the Castle, a group of about 40 homeless, transgender sex workers.

South Africa was the first country in the world to ban discrimination based on sexual orientation and is the only African nation to allow same-sex marriage.

But transgender activists say their community has been forgotten, and Sistaaz like Lameez Oliver are refusing to be left behind.

They are credited with successes for the trans community, including motivating a major court ruling on transgender prison rights.

But a core issue is a lack of affordable housing that limits their options, making it difficult for them to earn a living any other way than sex work.

That doesn't mean Oliver is ashamed of her job.

A homeless shelter that opened last year does have a transgender space, but Sistaaz members, who were labeled men at birth but identify as women, say they are usually assigned to male dormitories.

There, according to one member of the group, "men always want sexual favors."

Many end up living in makeshift shelters where they are vulnerable to being robbed, attacked, or having their homes dismantled by law enforcement agencies.

The Sistaaz' cause got some profile in August in a magazine highlighting their stories and advocacy.

About 1,500 copies were sold in Cape Town, New York, and Amsterdam, and Oliver is happy that people can see the lifestyle they are living, and the struggles they face.