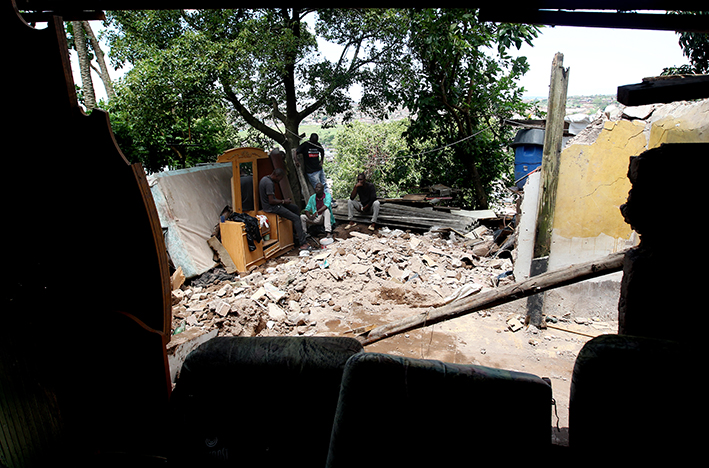 Aaron Zondo and his wife Nomathamasanqa Nyangule died after the roof and walls of their home came crashing down on Monday night during torrential rain in Amaoti, north of Durban.
Image: Sandile Ndlovu

A husband and wife died when their bedroom collapsed during torrential downpours in Amaoti, Inanda, north of Durban on Monday.

Aaron Zondo, 68, and his wife Nomathamasanqa Nyangule, 55, were asleep in their home when the incident happened.

On Tuesday, officials from the eThekwini municipality and the KZN departments of co-operative governance and traditional affairs and social development visited the grieving family.

The ruins which claimed the lives of a husband and wife on Monday night in Amaoti in Inanda, north of Durban. Torrential rains collapsed their home, entrapping them both. #DurbanFloods @TimesLIVE pic.twitter.com/VdxvFwKv8S

eThekwini mayor Mxolisi Kaunda said during the visit: "As the municipality, we have visited the family, we have engaged with family members, and pledged our support during this difficult period and expressed our heartfelt condolences."

Kaunda thanked the community for lending a helping hand by clearing debris and unblocking stormwater drains.

The couple's death has brought the death toll from this week's ongoing downpours to three, after one person was killed in northern KwaZulu-Natal in a lightning strike.

But the worst might not be over for residents of the province. In a statement on Tuesday, the South African Weather Service (Saws) said further showers were expected on Tuesday and the rest of the week.

Saws warned that accumulated rainfall for Thursday and Friday could exceed 100mm - and 150mm in some parts of the province. The service said this meant "extreme danger to life due to fast-flowing rivers".

"Over the central and eastern parts of KwaZulu-Natal, this heavy rain is expected to lead to flooding of roads and settlements both formal and informal, which may result in some communities being displaced and inaccessible. There is also a possibility of mudslides/landslides and soil erosion, especially along highly elevated areas, which might lead to further disruption to traffic flow," it said.

Saws said the weather system responsible for the ongoing rain, called a cut-off low (COL) pressure system, is over the Cape south coast and is expected to intensify while slowly moving northeastwards to KZN by Thursday.

Flooding in Cape Town while Joburg feels the heat

Localised flooding and road closures greeted the Western Cape on Friday morning as the first of several cold fronts expected over the weekend rolled ...
News
2 years ago

Disaster management teams have been placed on high alert in KwaZulu-Natal as heavy rains and thundershowers are expected to hit the province on ...
News
2 years ago