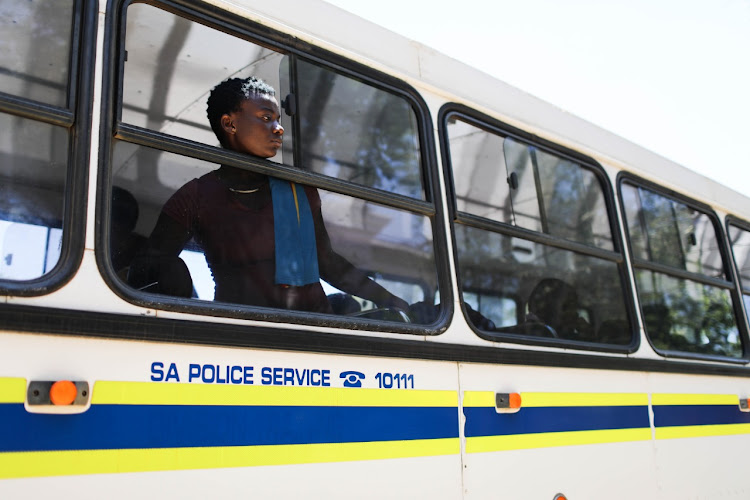 About 500 refugees were removed after being camped outside the UN offices in Brooklyn, Pretoria, and taken to nearby police stations in buses. More than 180 have been charged with trespassing and will appear in court on Monday.
Image: Alastair Russell

A total of 183 refugees are to appear in court on Monday on charges of trespassing following Friday's clashes with police outside the UN High Commission for Refugees'  offices in Pretoria, police said.

More than 500 refugees had to be removed from the UN agency's premises in Brooklyn on Friday after being camped outside the offices since last month.

The group, who were demanding to be moved to other countries because of fears of xenophobic attacks, had apparently climbed over the gates of the premises after being ordered by a court to disperse.

Police also disclosed on Saturday that 24 police officers were injured in the fracas, six of whom had to be rushed to hospital with serious injuries after police were “attacked with rocks, buckets and other objects, including dangerous weapons that police confiscated”.

“The six officers were discharged from hospital within hours after receiving medical attention,” police said.

They added that all of the “trespassers” had been removed from the premises.

“182 men and one woman were taken into custody by the police at different police stations, while 224 women, some of whom are pregnant, 169 children, and seven men were bussed to Lindela Repatriation Centre as a temporary accommodation pending conclusion of the verification process by the department of home affairs.

“The 182 men and one woman are expected to appear before the Pretoria magistrate’s court on Monday on charges of trespassing,” police said.

Meanwhile, Gauteng police commissioner Lt-Gen Elias Mawela has commended the manner in which police and officers from other law enforcement agencies responded to what he called the “violent resistance” from the alleged trespassers.

“Police on Friday morning, November 15 2019, arrived at the regional offices of the UNHCR with the intention of effecting arrests as per the trespassing case opened the previous day.

“As soon as police gained access to the property, the group started attacking the members while the women in the group were carrying babies on their backs and sides, making it difficult for police to react.

“Instead of retaliating, police weighed options in terms of appropriate tactics for crowd management. Water cannons were deployed and police were during that short space, able to apply tactics that ultimately ensured minimum injuries,” Gauteng police management said in a statement.

About 500 refugees were removed from the UN High Commission for Refugees (UNHCR) premises in Brooklyn, Pretoria, on Thursday after being camped ...
News
1 year ago

The high court in Pretoria on Wednesday ordered foreign nationals camping outside the Pretoria office of the UN High Commissioner for Refugees ...
News
1 year ago