It's official: 'KFC couple' getting married on New Year's Eve 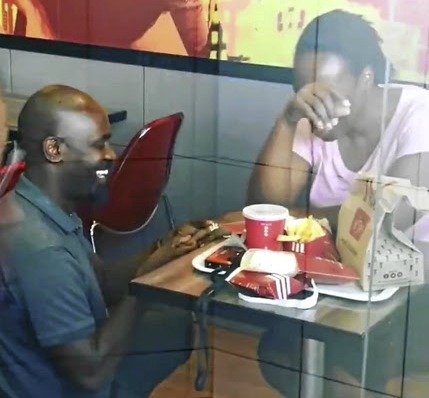 Hector Mkansi, 37, and Nonhlanhla Soldaat, 28, who got engaged in a KFC outlet, are to be married on New Year's Eve.
Image: Video image

The country’s most anticipated wedding is set to take place on New Year’s Eve.

On December 31, SA will get to ululate as "the KFC couple’s" wedding will finally take place.

Nonhlanhla Soldaat, 28, and Hector Mkansi, 37, touched the hearts of corporate SA and individuals alike when Mkansi  proposed to Soldaat at a KFC restaurant earlier this month

While the pair had been married previously, finances meant that Mkansi couldn't afford the things he wanted at the time.

A video of the “proposal” went viral.

Precious Thamaga, a sought-after wedding planner, announced that she had met the couple and "arrangements were under way".

Wedding Planner to the National Couple 🥰 The date is set🥂 @KFCSA reached out to me at the request of the couple. I met with Bhuti Hector & his lovely wife Sis Nonhlanhla today🌿 Wedding planning underway, I can’t wait 🙏🏽#KFCProposal #StreetwiseWedding #precioustheplanner pic.twitter.com/fsYvSC8vF2

Soldaat told TimesLIVE earlier this month that she wanted to feel like a princess on their special day.

“It’s so hard to say what I want, because growing up, my image of a perfect wedding was when a girl felt like a princess walking on glass in a beautiful gown. It would be great if I could wear a gown that’s not white, because I’ve done that already,” she said.

The couple met in 2010. Mkansi introduced Nonhlanhla to his family and started paying lobola the same year, struggling to get the money together.

Hector Mkansi and Nonhlanhla Soldaat rose to internet fame after a video of Mkansi proposing at his local KFC emerged on November 2 2019. The "KFC couple" spoke to TimesLIVE about their special proposal and their upcoming dream wedding. Additional Footage: KFC/Twiiter

WATCH | 'I want to feel like a princess,' says KFC bride

'Growing up, my image of a perfect wedding was when a girl felt like a princess walking on glass in a beautiful gown'
News
2 years ago

WATCH | 'I wanted her to feel special and loved': KFC couple open up on SA's tastiest love story

For Hector Mkansi, choosing a place to propose was easy - after all, his wife is a big fan of fried chicken.
News
2 years ago

'Thank you, South Africa', says KFC couple as they prepare for second wedding

South Africa’s favourite couple has spoken out for the first time since their proposal video at fast food outlet KFC went viral.
News
2 years ago