Grief over fallen firefighters days before Bank of Lisbon implosion 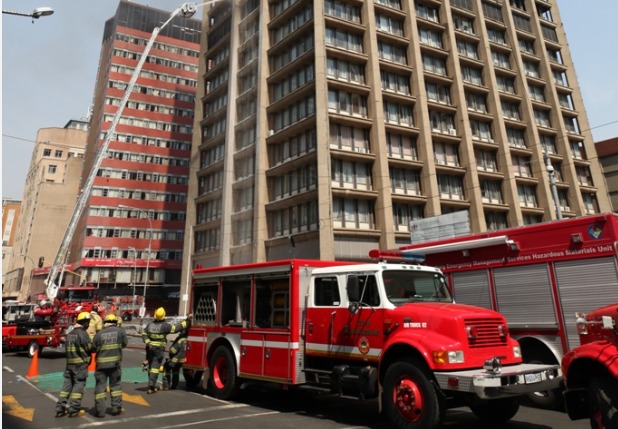 The Bank of Lisbon building in Johannesburg in which three firefighters died in September 2018 is to be demolished.
Image: Thapelo Morebudi

Just days before the Bank of Lisbon building in the Johannesburg city centre is brought crumbling down, grief has been brought back to the surface as some firefighters recall the loss of their colleagues in a blaze.

On Wednesday, the City of Johannesburg announced that the building would be demolished on Sunday.

One of the three dead firefighters' colleagues, who asked not to be named, said those who were affected by the fire were not informed about the implosion of the building.

“Apparently the Lisbon Bank is being blown up on Sunday. Sadly those of us affected and whose lives changed forever that day have not been informed. I find this crude, disrespectful and distasteful,” she wrote.

She said a number of firefighters were suffering from mental health problems since the incident, which the City of Johannesburg has not done anything about.

“More than one year later, we still do not have the report that was promised. Many of us would like to have walked up the building for the last time, to the spots our brothers died, to where our brothers and sister were trapped, terrified they were about to die, burnt alive, calling loved ones to say goodbye.

“The trauma of those of us racing against time trying to save and help our brothers lingers. It seems we are not worthy until you need us in your time of need,” she said.

But City of Johannesburg EMS spokesperson Robert Mulaudzi said all personnel who were affected by the fire were informed of its implosion.

“The implosion of the Bank of Lisbon building is being conducted by the building owners, which is the Gauteng department of infrastructure and property management. However from our side as City of Johannesburg Emergency Management Services personnel who were affected by the incident, together with the families, were all informed accordingly in advance about the implosion and they will be part of the proceedings on Sunday.”

He said the EMS department had conducted two investigations into the cause of the fire. These were conducted both internally and externally.

“Both reports are going to be presented to the affected families who lost their loved ones and the affected firefighters before it is released publicly. We understand that it’s long overdue.

“However we had to make sure that all procedures are followed to make sure that the process is fair to everyone involved and it also assists families to find closure on the loss of their loved ones. We urge our residents of the City of Johannesburg to be patient with us as we complete all this processes,” said Mulaudzi.

The Bank of Lisbon building in downtown Johannesburg - where three fire fighters died last year after a fire - was expected to be demolished on ...
News
2 years ago

A name on a truck is cold comfort for a Newcastle father whose firefighter son died in the Bank of Lisbon fire in Johannesburg on September 5 last ...
News
2 years ago

The image of firefighter Mduduzi Ndlovu’s charred and smouldering body is etched on the memory of veteran medic Kim Williams.
News
3 years ago