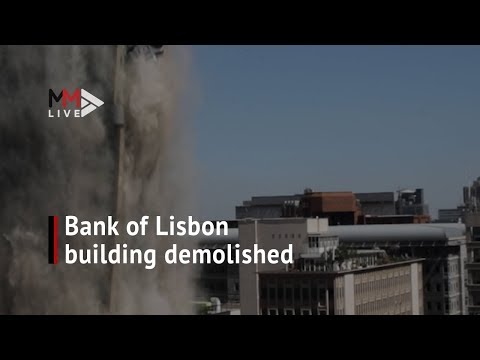 Almost 900kg of explosives were used to demolish the Bank of Lisbon building in the Johannesburg CBD on Sunday, an exercise that has cost the city R90m to date.

Gauteng’s MEC for infrastructure development, Tasneem Motara, said she was pleased with the successful implosion of the building.

“I must admit, I was a bit nervous when the sirens went off, but the demolition has gone successfully. There has been no damage to property and no-one has been hurt,” Motara told reporters in Johannesburg.

A siren wailed just after 9.10am on Sunday, warning those in the area that the building, which claimed the lives of three firefighters in a blaze past year, was about to be demolished.

The building went down in seconds.

The 31-storey building previously housed the Gauteng departments of health and human settlements. It was declared unsafe after the deadly fire.

Motara said 894kg of explosions were used to implode the building.

She said the department budgeted R140m for the demolition of the building and had spent R90m to date.

The building would be rebuilt and form part of the Kopanong precinct.

“The experts said that this was one of the most difficult demolitions they had to work on. This brings us to an end of an era.”

She said the clearing of the site and the roads was already under way.