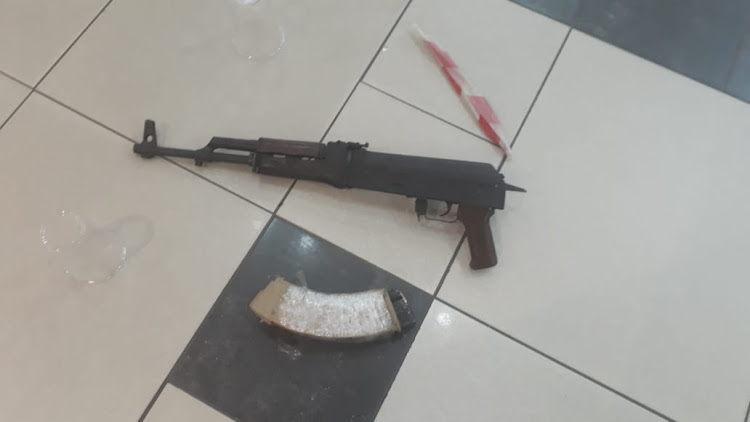 Police recovered an AK47 with two loaded magazines from the scene.
Image: Saps

A suspected robber was killed and a security guard wounded in a shoot-out after a robbery at a jewellery store at Bedford Centre in Ekurhuleni on Sunday, police said.

Peters said security guards who responded to the call were met with several shots from the suspects.

She said the security officers returned fire, killing one of the suspects.

One of the guards was injured and was rushed to hospital. The armed robbers fled the scene.

“It is believed that there could have been more than just three suspects as the alleged robbers made off in two vehicles,” Peters said.

Police recovered an AK47 with two loaded magazines from the scene.

The value of the stolen watches was not immediately known.

Bedford Centre Shooting. Screw this is America... Bruv, This is South Africa... pic.twitter.com/zhCXX9blhw

Bedford Centre has armed security guards, they sit by the banks and near the jewelry stores but what is one security guard with a 9mm suppose to do against 7 robbers with assault rifles

A security guard is in a critical condition after being shot at a shopping centre in Diepsloot, north of Johannesburg.
News
2 years ago

Anele Ntlati was walking to work after buying lunch when he heard gunshots and felt his leg go numb.
News
2 years ago

A man was shot and killed and woman seriously injured in an apparent botched robbery at KwaMashu’s Bridge City shopping centre on Wednesday afternoon.
News
3 years ago