The Western Cape government wants Tafelberg to be sold to a private school, while housing activists want it to be used for affordable housing 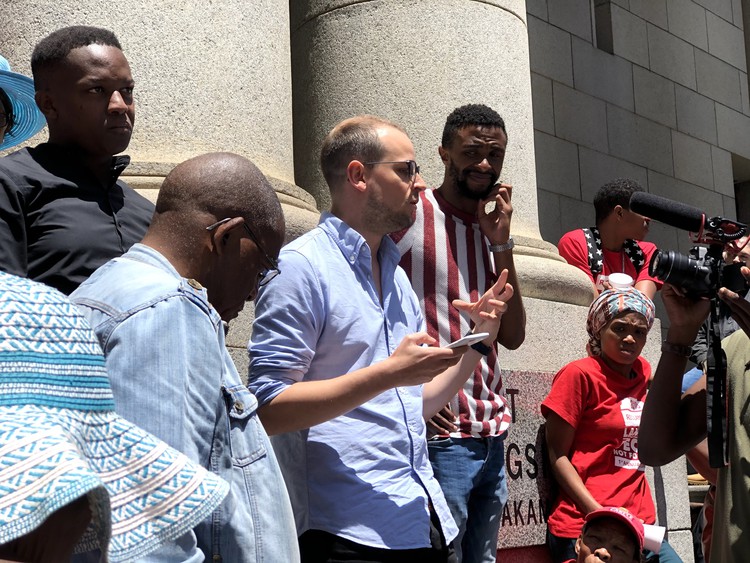 A four-day case about the fate of a Tafelberg property began in the Cape Town high court on Monday. The case could set a precedent on what can be done with inner-city state-owned land.

Tafelberg is a disused property in Sea Point, Cape Town. Housing activists, via the organisation Reclaim the City, want it to be developed into housing for low-income residents who work in Sea Point. The provincial government, however, wants to sell the property for the development of a private school.

Reclaim the City and the Ndifuna Ukwazi Law Centre are the applicants. They want to stop the sale. The Western Cape government and the Phyllis Jowell Jewish Day School are among the respondents.

Close to 50 Reclaim the City supporters filled the gallery on Monday, wearing red “Land for People, Not for Profit” T-shirts.

Reclaim the City argued that Tafelberg “provides a prime opportunity to redress spatial apartheid through the provision of well-located land for social housing”. The organisation described social housing as a “critical tool not only to address the persistent demand for affordable housing in Cape Town, but also to restructure our cities”.

The big showdown between the Ingonyama Trust, whose sole trustee is Zulu king Goodwill Zwelithini, and informal land rights holders in KwaZulu-Natal ...
News
2 years ago

Elizabeth Gqoboka, one of the organisation’s founders, told GroundUp: “As a former resident who’s been living in Sea Point, and now living at an occupation at Helen Bowden Nurses Home, this case is very important [to me].”

“The starting point has to be that they’ve had 25 years already and they have done absolutely nothing so far. One has to look at this as a 25-year period of inaction. There has been an obligation since 1994 to redress spatial injustice,” argued Hathorn.

Judge Gamble questioned Hathorn about the availability of District Six land for social housing, to which Hathorn replied that there was land available there, but it was subject to a restitution claim, which was a different issue than the one being addressed in court.

Another issue Judge Gamble raised was the high cost of well-located land in the city centre and that it was nearly impossible to buy land at market rates to build social housing. Hathorn said the state should take land the city and province already owned and use it for social housing.

“Central Cape Town cannot be ignored,” said Hathorn. He noted that 200,000 people commuted to Cape Town every day and that properties in the city centre had fundamental importance to the region as a whole.

The case will continue on Tuesday. There will be further argument from the national department of human settlements, the Social Housing Regulatory Authority, Equal Education (as a friend of the court) and the Western Cape provincial government.

The South African Human Rights Commission (SAHRC) said on Thursday it would open criminal cases against two people who failed to honour a subpoena in ...
News
2 years ago