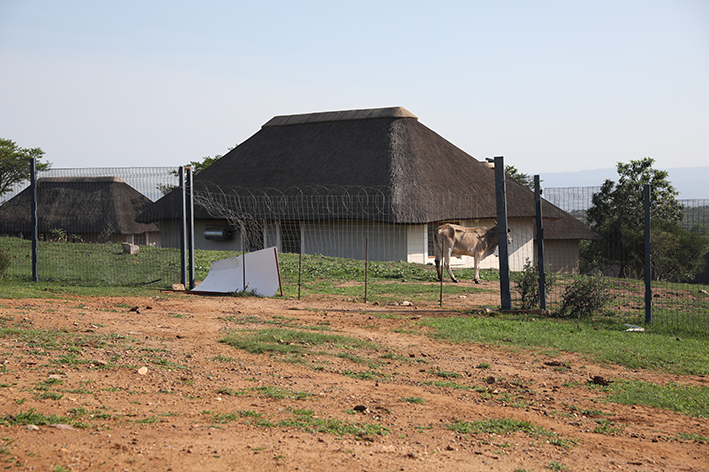 Part of the fence surrounding the security precinct outside former president Jacob Zuma's Nkandla homestead is seen broken. The fence has since been patched and Zuma's spokesperson said this part of the precinct was not Zuma's homestead.
Image: Sandile Ndlovu

His spokesperson Vukile Mathabela told TimesLIVE that Zuma’s Nkandla compound was secure and under no threat, despite pictures circulating on social media which showed a security fence broken in places.

The pictures sparked speculation that the controversial R246m homestead was falling apart, while some raised safety issues regarding the former president.

The Nkandla municipality initially indicated that it would embark on a “fact finding mission”, but later did an about-turn, saying it was a private residence and that they couldn't enter the compound.

Mathabela said: “We can confirm that this is not the former president’s home but other properties outside, which SAPS and public works can be in a position to comment on.

“If that was the former president’s home, it would mean a breach of security. But this is not the case. His home is still secure,” he added.

Municipal officials have embarked on a “fact-finding” mission to establish whether former president Jacob Zuma’s controversial R246m homestead is in ...
News
2 years ago

When a TimesLIVE team visited the area on Tuesday, there was very little activity in and around the former president's compound.

The part of the fence that appeared to be broken had been hastily patched up.

The homestead became a source of national controversy after it emerged that public funds were used to upgrade the compound. These included a fire pool, the fence and a helipad.

This is the latest development in a string of woes to hit the former president.

Last week, judgment was reserved in the matter in which Zuma and French arms company Thales are appealing a decision to dismiss their application for a permanent stay of prosecution against them.

The Sunday Times reported last year that should Zuma be convicted of corruption‚ the state could confiscate his Nkandla homestead for having been built with the “proceeds of crime”.

The curators of liquidated VBS Mutual Bank also have their sights on the homestead.

Papers filed in the high court in Pietermaritzburg said Zuma had to pay back R7.3m on his bond, or liquidators would attach the property.

Jacob Zuma's family in squabble over money owed on tender

Former president Jacob Zuma has been caught in a bitter battle between his fiancée and nephew over a tender business deal gone wrong.
News
2 years ago

Ghosts of Nkandla could put buyers off Jacob Zuma homestead

Your own firepool to plunge into on a summer's day, immaculate paving that won't catch your Christian Louboutin heels and a world-famous chicken coop ...
News
2 years ago

What do Zuma and Mugabe have in common? Well, big, lavish homes for one

While many mourners gathered to pay their respects to the late former Zimbabwean president, some were reacting to his luxurious blue roof home.
News
2 years ago