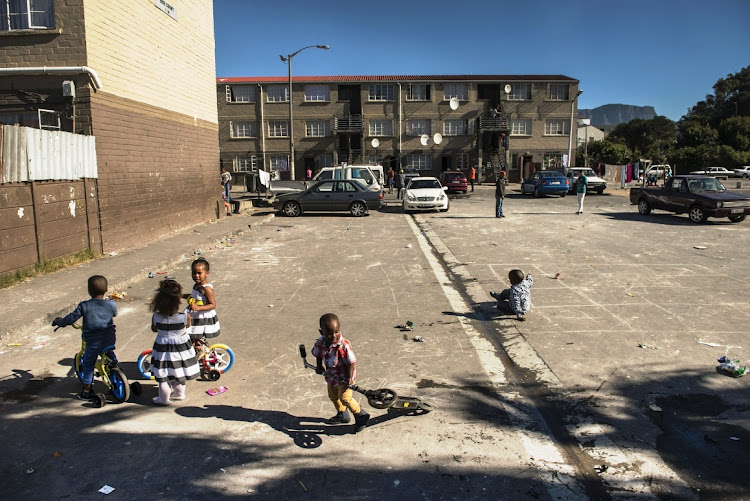 Hanover Park on the Cape Flats is one of the areas where Cape Town's 1,000 new learner law enforcement officers will be deployed in an attempt to curb gang violence.
Image: David Harrison

More than 1,300 extra officers will be part of a R1.75bn escalation of the war against violent crime in Cape Town’s gang hotspots.

The city council mayoral committee was due to meet on Thursday to give the go-ahead for a three-and-a-half-year “law enforcement advancement plan” - dubbed Leap - that will be jointly funded with the Western Cape government.

The committee’s approval is expected to be followed by a council rubber-stamp on December 5. The first 500 learner law enforcement officers will be appointed on February 1. Another 500 officers will be added on July 1.  They will be supported by 186 commanders and investigators and 151 support staff.

Western Cape Premier Alan Winde announced "the most comprehensive and most expensive" safety plan in the province's history, with 3 000 new law ...
News
2 years ago

The Western Cape government has committed R1.3bn to the Leap project until June 30 2023. The City of Cape Town’s contribution will be R452m.

The other 500 will be part of investigative teams in the same areas, crime prevention teams, and a land invasion unit supplementing the efforts of the city council’s existing anti-land invasion officers.

A report for Thursday’s mayoral committee meeting states that the Leap plan will more than double the size of the city council law-enforcement, traffic and co-ordination department.

The first 500 new learner law enforcement officers, whose annual employment costs from next July will be R284,000, will be recruited from the pool of trained officers who have emerged from the council’s auxiliary and expanded public works programme (EPWP) training initiatives.

The second group of 500 officers will be recruited in the middle of 2020 from the replenished pool of auxiliary officers. Most of their training will take place at the city's Metropolitan Police Train Academy.

The Western Cape’s murder rate increased by 14% during the army’s two-month deployment on the Cape Flats, which is due to end tomorrow.
News
2 years ago

The financial plan for Leap includes R44m for 175 4x4 bakkies and 52 sedans, and R11.2m for Glock 19 9mm pistols and ammunition for each officer.

The report warned that one of the risks of the Leap plan was the possible financial burden on Cape Town ratepayers if the funding agreement with the provincial government ended on June 30 2023.

“The estimated impact of this in 2023/24 would be an additional 6% rates increase," it states.

There was no “definitive and agreed” plan for what to do with the learner law enforcement officers when their proposed fixed-term contracts expired.

“This will expose the city to potential industrial action in the event of contract terminations. It is anticipated that [the officers] will have a strong case to be made permanent after the contract ends.”

Details of the Leap plan follow mayor Dan Plato’s speech to the council on October 31, in which he said it was a response to the failure of the police and the National Prosecuting Authority (NPA) to address rising crime.

"I have continuously raised my concern about the levels of resourcing that the South African Police Service has in Cape Town, and a number of other crucial shortcomings in our criminal justice system,” he said.

“I believe that our programme will begin to stabilise the hotspots in the metro, where violence and crime have disrupted people’s ability to live in peace.”

Leap is also part of what Western Cape premier Alan Winde said in September would be “the most comprehensive and expensive safety plan”, with the aim of halving the murder rate in 10 years.

“The murder ratio in the Western Cape is now at 60 for every 100,000 people - and yet we know that violent crime, and murder in particular, is concentrated in a few specific neighbourhoods. Almost half of all murders occurred in areas covered by just 10 police stations,” said Winde.

“Already your provincial police ombudsman does so, and several other entities do so, like private investigators and forensic investigators, so investigations are by no means limited to Saps,” said Smith.

Thirteen weeks have passed since soldiers arrived in the gang-ridden crime hotspots of the Cape Flats - and, after the operation was initially ...
News
2 years ago

Some people on the Cape Flats want revenge on gangsters, others want the military to stay forever, and many just dream of escaping.But for a group of ...
News
2 years ago

Gang violence: Mother of slain Bishop Lavis woman doesn’t have much faith in the army

A month ago, 30-year-old Lauren Prins was shot ten times and murdered outside her home in Bishop Lavis. She had a spinal problem and was disabled. On ...
News
2 years ago

#CrimeStats | This is what a record-high murder rate sounds like

Hours before police bosses released annual crime statistics on Thursday, a shooting in broad daylight between blocks of flats in gang-plagued ...
News
2 years ago