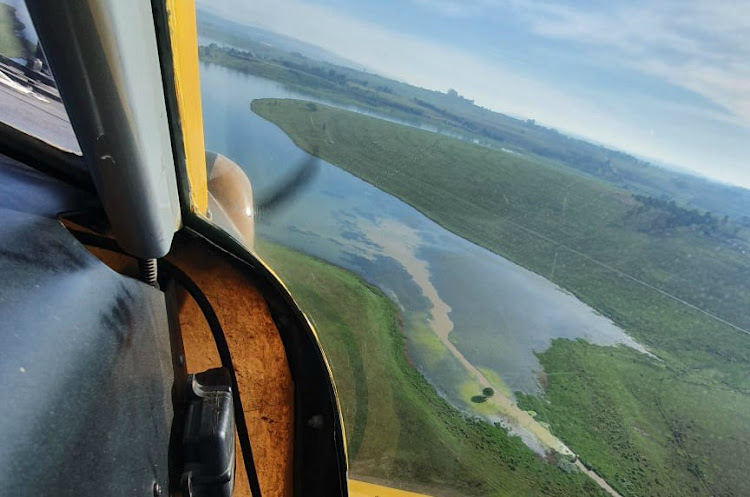 An aerial view of sewage spilling into the Midmar Dam in the KZN Midlands. Umgeni Water's CEO says 'a lot of community engagement and teaching' needs to be done to stop people from blocking drains and pipes.
Image: Supplied

As sewage continues to spill into Midmar Dam in the KwaZulu-Natal Midlands, water authority Umgeni Water has said that communities who dump trash willy-nilly into the stormwater drain system are partially to blame.

A criminal case has been opened against municipalities in the area, with sewage emanating from the Mpophomeni area running into the dam. The spill resulted in part of Midmar being closed to the public 10 days ago.

But while Umgeni Water CEO Thami Hlongwa admitted that one of the reasons for the problem was insufficient stormwater and sewage infrastructure, the community itself wasn’t immune from blame.

“The spillage took place as a result of [water] reticulation infrastructure failing to cope, simply because of stormwater ingressing into the sewer network. Yes, the sewer network in the Mpophomeni area requires an upgrade, but we also need to do a lot of community engagement and teaching.

“One of the things we found in our screens ... we found a whole skinned cow, which means the community are just opening the manholes, and dumping in there, and when it gets pushed by the rains, naturally it gets blocked in the screens and it gets pushed back into the manholes and a spillage occurs. We even found chickens being thrown in there,” he said at the release of Umgeni Water’s 2018/19 annual report in Durban on Thursday.

Screens are installed in water networks to catch debris and prevent it from flowing into rivers and dams - but when the screens are blocked, water cannot pass through them, which causes back-flow and damage to the system.

Hlongwa said a new sewage treatment works was planned for Mpophomeni, and wider pipes were being installed, which would reduce the chance of such incidents happening again.

However, despite the current spill, he said it was not affecting the drinking water being supplied.

“The impact on water quality is quite minimal, but we have to manage the situation to make sure it doesn’t get out of hand - especially because we have heavy rains to come in December,” he said.

The Msunduzi municipality's environmental health unit on Tuesday warned communities in and around Pietermaritzburg to stay away from rivers affected ...
News
2 years ago