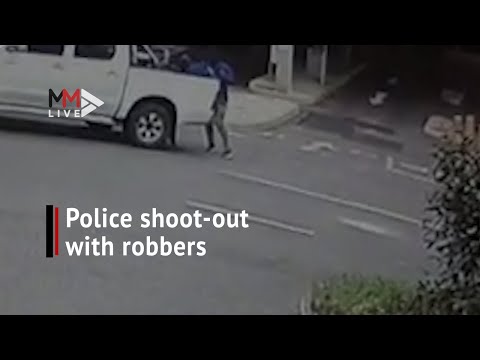 A man has been shot dead during a shoot-out with police outside a mall in Westville, west of Durban.

SAPS KwaZulu-Natal spokesperson Col Thembeka Mbele said the man was shot while fleeing the scene of a business robbery at the Village Market on Thursday. He and an accomplice allegedly held employees of the business at gunpoint and took an undisclosed amount of money.

“As they were attempting to flee they were confronted by the police and a shoot-out ensued. One suspect was fatally shot and the other managed to escape,” said Mbele.

Meanwhile, dramatic footage of a policeman firing at the alleged robbers has gone viral on social media. In the video clip, a police officer fires at the suspects, who shoot back at him with one bullet narrowly missing him.

Undaunted, the policeman rolls over, moves to another location and continues to fire at the suspects. A bakkie, believed to be the getaway vehicle, is then seen speeding away, as a man continues to fire from the vehicle.

In a second video, taken from a different location, a policeman is seen taking cover behind a police van as the suspects, believed to have been armed with AK-47s, fire at him. One armed man is then seen running behind the policeman while he is still under fire, while another confronts him. The policeman then falls to the ground.

The bakkie then pulls out of the mall parking lot and the two suspects attempt to get into the back of it. However, one of them is shot by another policeman and falls to the ground. The bakkie then speeds off.

Rescue Care spokesperson Garrith Jamieson said paramedics arrived at the scene and found one person dead. Two others were treated at the scene.

A case of robbery and an inquest docket were opened at Westville police station.

“A follow-up operation is under way to hunt the suspects down,” said Mbele.

Arrive Alive tweeted a picture of a burnt-out bakkie, believed to have been used in the robbery.