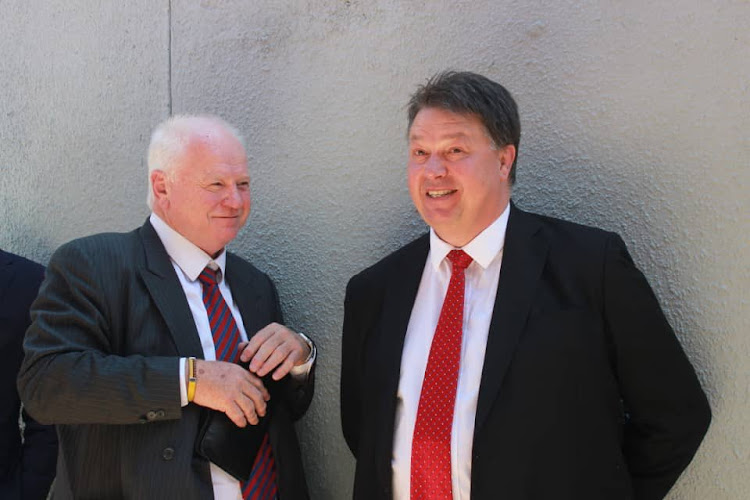 Advocates Mike Hellens and Dawie Joubert were reportedly arrested in Namibia on Friday for allegedly working in the country without a work permit.
Image: Twitter via @NewEraNewspaper

Several media outlets took to Twitter on Friday,  reporting that Hellens and Joubert had been detained by immigration officials for working in the country without work permits.

They were in the country to represent six people, including two former Namibian ministers, Bernhard Esau, 61, and Sacky Shanghala, 42, who were arrested over their alleged involvement in a fishing quota kickback scandal.

The "Fishrot 6" case was in court on Thursday but was postponed to Friday when the six were expected to apply for bail.

But there was drama outside the courtroom.

According to the New Era newspaper, Hellens and Joubert's passports had been confiscated.

Drama is unfolding at the Windhoek Magistrate’s Court where two South African senior counsels Mike Hellens and Dawie Joubert representing former ministers Bernhard Esau and Sacky Shanghala have had their passports confiscated after it emerged that they don’t have work permits. pic.twitter.com/qD1raejB5A

Other news organisation also reported on the arrests.

Prominent South African lawyers, Mike Hellens & Dawie Joubert, who are in the country to represent former minister Bernard Esau & Sacky Shanghala in the #fishrot saga, have just been arrested. The two were taken into custody after it was found that they do not have work permits. pic.twitter.com/QdXssAAeTE

An immigration official is arresting the South African senior counsel Mike Hellens and Dawie Joubert, representing the 'Fishrot 6', for being in Namibia via without work permits. Video: Werner Menges pic.twitter.com/fHOriadMfX

The six men were arrested on Wednesday.