A deadly boomslang in your toilet? Yup, one was rescued by conservationists in KwaZulu-Natal 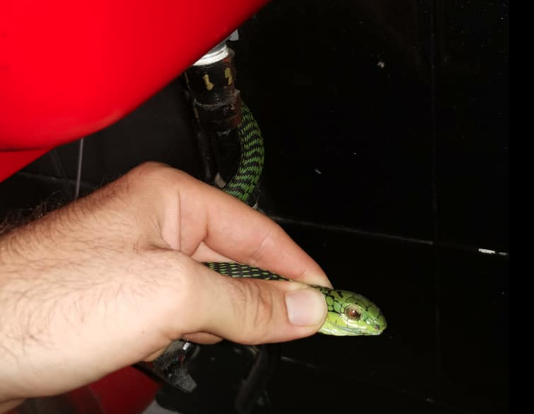 The KwaZulu-Natal amphibian and reptile conservation centre last week rescued a venomous boomslang from a home in North Park Nature Reserve in Northdene.

The centre's Nick Evans said the family spotted the snake when it was attacked by birds outside. After the attack, it “disappeared”, but was spotted inside the house later when it went to seek cover. It slithered in and hid inside the toilet cistern.

Evans shared the news on the conservation centre's Facebook page. He said the snake was terrified during its extraction and rescue.

“It was a little tricky extracting it from behind there. The poor thing was terrified. After being attacked by birds, its now being attacked by humans. But when it popped its head far enough, I managed to get the tongs on it and pin it down.”

Evans described the green boomslang as “beautiful” and said it was released a few hours later.

A local man was walking towards his house when he noticed the trapped krait and informed the forestry department.Snake rescuers arrived later and ...
News
1 year ago

WATCH | A 1.5m cobra rescued from under car's bonnet after two hours

A 1.5m cobra was rescued from under a car bonnet parked in a court compound in western India.
News
1 year ago

Durban’s heavy rainfall is likely to bring to the surface certain potentially dangerous snakes, as well as less harmful ones
News
1 year ago