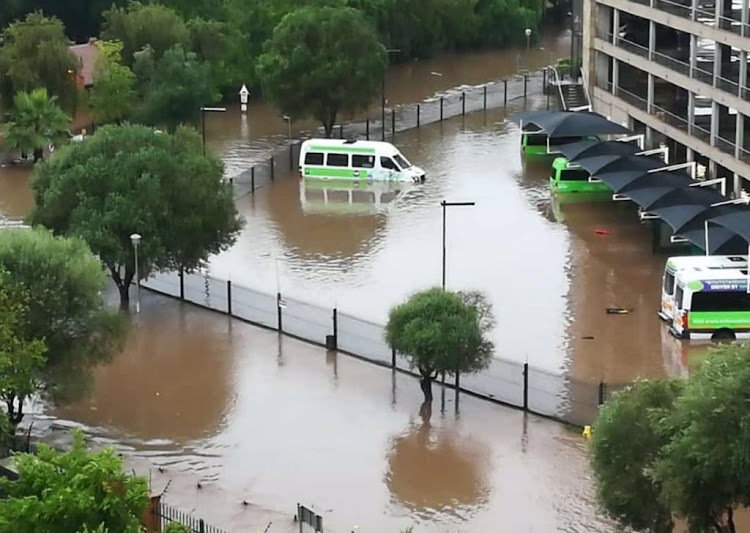 Centurion and Pretoria were affected by flooding on Monday after days of steady rain.
Image: Cool Fellow @i_AM_Kholo via Twitter

The City of Tshwane said 150 people were rescued after being trapped in Mamelodi due to the floods on Monday.

The displaced residents are being housed at a community hall in the area.

“There are no reported casualties and all people are accounted for so far,” acting city mayor Abel Tau said.

The city asked for donations of blankets, food, nappies for babies and clothing for all ages.

Contributions can be dropped off at the Nellmapius Library and Community Hall, and the Centurion Fire Station.

The City of Tshwane said emergency teams and police had rescued people from a range of places, including the tops of vehicles and the roofs of shacks. Operations were conducted in a number of areas, including an informal settlement near SuperSport Park, Nellmapius Bridge and Bronkhorstspruit.

As several parts of Gauteng lay under water after six days of steady rain, social media footage of a man offering people a lift across a flooded road on a trolley drew admiration.

He was complimented with comments such as, “Entrepreneurs are people that see a problem and create solutions” and “In the middle of difficulty lies opportunity”. One wit snapped out this line: “Phanda Push Pay.”

#flooding Now This reminds me of @djsbu... True definition of a real hustler. If you didn't know, entrepreneurs don't complain, they come up with solutions & make money in the process... #DJSBU pic.twitter.com/mtWGWjPemM

On Monday, the air force was called in to rescue numerous people trapped by flood waters in Centurion.

Several roads and low-water bridges were flooded, and cars were swept away.

ER24 spokesperson Russel Meiring said two air force helicopters had been brought in to help rescue people trapped in a hotel in Centurion, adding that paramedics were also part of the rescue operation.

Meiring told TimesLIVE on Tuesday morning that more than 70 people were rescued from the venue.

Hennops Revival said on Twitter the water level had dropped substantially in the area since yesterday.

An informal settlement along Tsamaya Road in Mamelodi is being swept away by heavy rains and floods.😳 #FlashFloods #Flooding pic.twitter.com/z7gaercXHg

Most days we compare ourselves to other people. But here I am in my cosy home and 10 mintes away from my house,people have lost their homes due to this rain. Appreciate your life always. This is at Mamelodi, Eerste fabriek #flooding pic.twitter.com/2OnOjer5wE

A colleagues mine shared this with me yesterday. Taken with a friends drone yesterday. #MotherNature #Haarties #flooding pic.twitter.com/Go4P6Uch9G

The air force was called in on Monday to rescue numerous people trapped by flood waters as heavy rain continued to pelt Centurion and other parts of ...
News
2 years ago

A reading conducted on Monday morning showed the level of the Vaal Dam at 39.5%
News
2 years ago