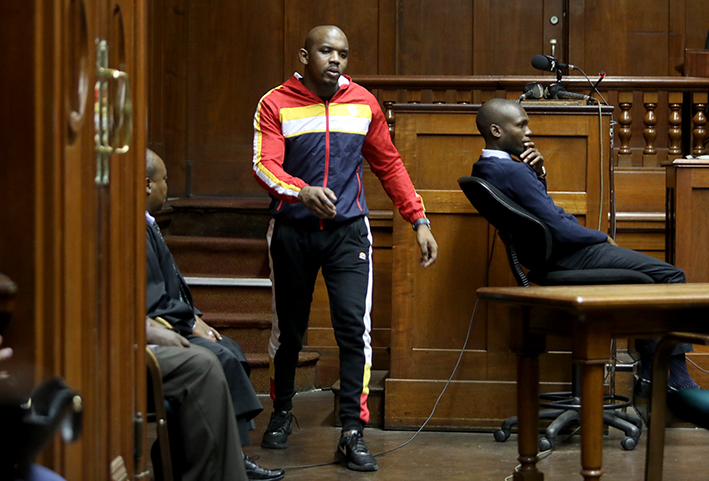 Murder accused Thabani Mzolo has been painted as a jilted lover who killed Mangosuthu University of Technology student Zolile Khumalo because she broke up with him two days before.

This is the version senior state advocate Nadira Moosa put before the court during her cross-examination of Mzolo in the Durban high court on Tuesday.

“I put it to you that the deceased, in the state's version, had broken up with you two days before [May 1 2018, the day the killing happened], and you were aware of that," she told Mzolo. "You then tried to contact her but she did not answer her phone. This is according to your version.

"I put it to you further that you were angered by the deceased's reaction towards you. That's why you decided to ambush her that night."

Mzolo denied the breakup, saying he had gone to Khumalo’s Lonsdale residence on the night she was killed because they had arranged to see each other. He also said the reason Khumalo was not taking his calls was that she had left her phone at the student residence when she went to buy drawing paper.

Mzolo said he was "in communication" with Khumalo via WhatsApp.

Philisiwe Khumalo wept silently in the gallery of the Durban high court as the man accused of killing her daughter uttered the words "I'm sorry".
News
2 years ago

On the night Khumalo was killed, Mzolo was signed into the South Beach, Durban, residence by a friend while Khumalo was not in her room.

Mzolo had called another friend, Smiso Buthelezi, asking him to check if Khumalo was there before he arrived.

Mzolo told the court he went to Buthelezi’s room to take a shower and, a while later, asked him to go back to Khumalo’s room to see if she was there and ask her for a T-shirt he could change into.

“I put it to you that because you wanted the element of surprise on your side, you first sent Smiso under the pretense of looking for a T-shirt. You sent a WhatsApp message from Smiso’s phone to the deceased because you knew she would not reply if she knew it was you,” said Moosa.

On Monday Mzolo told the court that when he got to Khumalo’s room, he found her with a gun. He claimed he took it from her and said as he was leaving, Khumalo tried to grab the gun from him while leaning in for a kiss, and the gun went off.

Khumalo died on the floor in her room at Lonsdale Residence in May 2018 as a result of gunshot wounds to her head and chest. Mzolo was arrested shortly after her death, while still inside the residential building.

Moosa questioned why Mzolo did not check if the gun was loaded, especially because he had previously told the court Khumalo had threatened to shoot him and once, according to Mzolo, pulled a gun on him after suspecting he was cheating on her.

“There was nothing I would have done with the firearm, so there was no need to check if it was loaded or not. I don’t even know how to check if a gun is safe or not,” he said.

'Your cleverness will be the end of our relationship,' slain MUT student told

On the day that Mangosuthu University of Technology student Zolile Khumalo was killed, her boyfriend Thabani Mzolo warned her that her “cleverness” ...
News
2 years ago

Thabani Mzolo, the man accused of murdering Mangosuthu University of Technology student Zolile Khumalo, has claimed it was the slain student who was ...
News
2 years ago