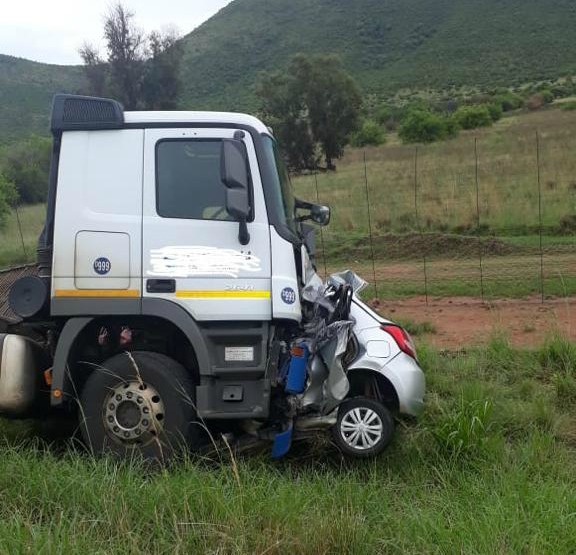 A 37-year-old man was killed instantly when he drove into an oncoming truck at Bela Bela in Limpopo.
Image: SAPS

A 37-year-old man who allegedly killed his wife and stepdaughter drove the family car into an approaching truck afterwards, killing himself instantly at Bela Bela in Limpopo.

Thandi Mathebula, 39, and the 17-year-old were found dead at the family's home on Tuesday.

“It is alleged that neighbours became suspicious and went to check at the house,” said police spokesperson Brig Motlafela Mojapelo. “Someone was seen lying on the kitchen floor inside the locked house.

“They immediately contacted the police who forced open the door and discovered the woman lying dead on the kitchen floor and the lifeless body of her daughter in the bedroom,” said Mojapelo.

He said the man took the family car after allegedly committing the murders and drove on to the Rooiberg/Bela Bela R516 road. He reportedly crashed head-on into a truck travelling in the opposite direction.

Mojapelo said preliminary investigations indicated the women may have been strangled.

Provincial police commissioner Lt-Gen Nneke Ledwaba warned the community not to resort to violence and instead seek professional help when dealing with domestic issues.

Two cases of murder and one of culpable homicide were opened for investigation.

A father has been arrested for allegedly killing his four-year-old son and burying his body in a shallow grave in the backyard of his home in ...
News
2 years ago

For five days, Witbank murder mom Zinhle Maditla slept in the same room as her four dead children — whom she’d poisoned after a lovers’ quarrel — ...
News
2 years ago

Alleged killer nanny from Daveyton expected back in court

A Daveyton nanny who allegedly killed the child she was hired to care for was on Tuesday expected back in the Benoni magistrate’s court, in the east ...
News
2 years ago