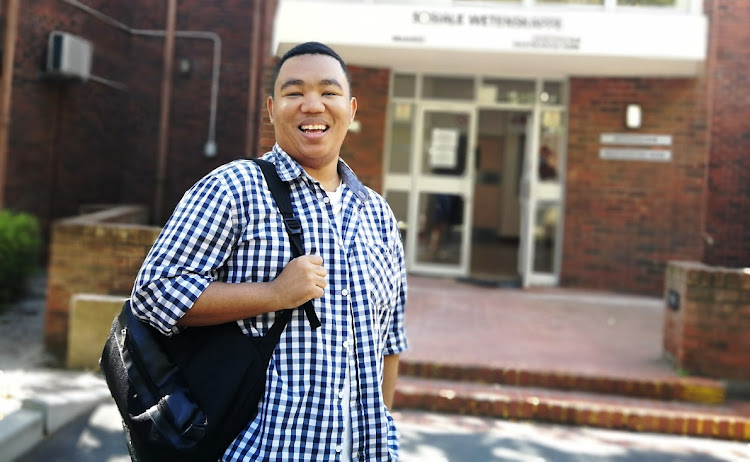 When his mother was diagnosed with cancer, Johan Fourie put his studies on hold to care for her.

When he returned to the University of the Western Cape (UWC), he too was diagnosed with the disease - but that did not deter him from finishing his degree in social work.

“It is very important to me and a major accomplishment because I come from a home where the highest qualification for my parents was grade 3,” Fourie told TimesLIVE.

“I value the opportunity of becoming a qualified social worker and being able to serve communities around the country with grace, compassion and empathy.”

Fourie, the oldest of three siblings, suspended his studies in 2014 to become his mother Hendrieka’s primary caregiver after she fell ill with Hodgkin’s lymphoma. When her cancer went into remission two years later, he decided to return to UWC.

A top student, he was selected for an exchange programme at the University of Missouri in the US, awarded a bursary and won several academic accolades. He also began working as a counsellor.

But as he was preparing for his 2019 mid-year assessments, he was diagnosed with chronic myeloid leukaemia.

“The diagnosis came after a routine visit to the campus health centre. I didn’t even really feel sick," he said. “I decided to tell no one. There I was, counselling others whenever they were diagnosed with cancer and other diseases, while I was falling apart. But I had to accept the reality of my situation. I had to pick myself up and do what I needed to do.

I hope my story encourages students in the same or similar situations.

“Things happened fast. Two days later I was admitted to the hospital, and within the next two days I had to start chemotherapy, with the diagnosis confirming the malignancy."

Then came another setback: due to a technicality, his medical aid declined to cover medical bills totalling R30,000.

“I cannot begin to describe how difficult this period was. Emotionally, I had to deal with the unexpected diagnosis, the treatment, the debt, the speed at which everything was happening, as well as the uncertainty of what is going to happen to my studies.

“I was resentful. At first I resisted taking the medication, but I reminded myself to stay committed to my goals.”

Currently working as an intern at Tygerberg Hospital in Cape Town, Fourie is still receiving treatment and dealing with the side effects of the disease and its treatment, including nausea and arthritis.

“I hope my story encourages students in the same or similar situations. Despite all the challenges — food insecurity, mental health issues, stressful studies and failing physical health — it is possible to overcome,” he said.

“I still get calls from debt collectors every day, but I’m hopeful that I will be able to find work to service my debts.”

As the unemployment crisis worsens, South Africans this week rallied around a qualified KwaZulu-Natal teacher who said he had battled depression and ...
News
2 years ago

Gender plays a role, but mainly poor facilities at schools.
News
2 years ago

Inspiration from her mom to succeed

Mildreat Muroyiwa experienced two major life events during her first year at the University of Cape Town. She lost her mother to cancer, and then she ...
News
2 years ago