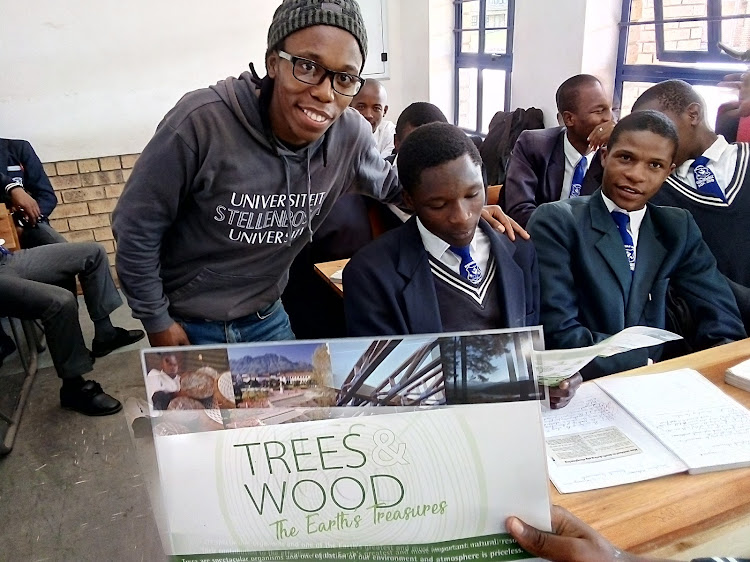 Goldsmith was expected to graduate from the university on Thursday.

“When my mom, Vuyiswa Veronica Goldsmith, was pregnant, she became so ill that on more than two occasions the doctors suggested she should terminate the pregnancy because the baby would be stillborn. She refused,” he said.

Twenty-five-year-old Goldsmith was born and raised in Marhewini, a small village in the Libode district of the Eastern Cape.

He told the university that as a boy, people often questioned where his name came from, as it was usually a girl's name.

Goldsmith's mom died when he was only five and his aunt, Nondumiso Ntloko, raised him.

“My mother passed on before I could experience her love and kindness. Those were the character traits which many people in my home community tell me stories about,” he said.

Goldsmith said his mother was passionate about education. She ran a crèche, taught primary school classes and ran a night school for adults. He believes he inherited that passion.

“I see now that I was genetically predisposed to my mother’s passion for teaching and learning,” he said.

Goldsmith’s teaching passion goes back as far as 2012, when he was in grade 11. His school, St Patrick High, burnt down and pupils were forced to study under trees on the school's grounds. He challenged himself to teach his peers.

“The school was under-resourced and we didn’t have life science and agricultural science teachers. I took it upon myself to teach my grade 11 classmates for seven months, with supervision from the grade 12 life science teacher,” he told the university.

During his university years, he also tutored his peers.

He said his positive attitude, willingness to learn and compassion were essential qualities that help him “make his world a better place”.

When his mother was diagnosed with cancer, Johan Fourie put his studies on hold to care for her. When he returned to university, he too was diagnosed ...
News
2 years ago

Inspiration from her mom to succeed

Mildreat Muroyiwa experienced two major life events during her first year at the University of Cape Town. She lost her mother to cancer, and then she ...
News
2 years ago

Gay sangoma beats the odds to earn his degree

Battling depression‚ sexual insecurity and a calling from the ancestors - all while juggling schoolwork - has been one hell of a ride for this proud ...
News
3 years ago