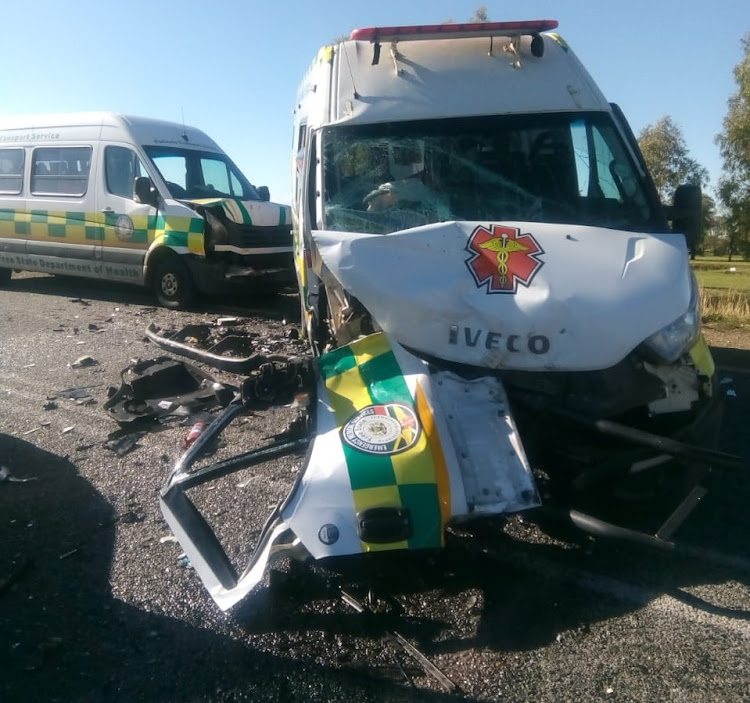 Two vehicles were traveling on the R76 to Boitumelo Hospital in Kroonstad when an oncoming vehicle collided with the ambulance.
Image: Free State department of health

Three people, including a young girl, died after their car collided head-on with an ambulance on the R76 near Kroonstad in the Free State on Wednesday.

Free State health department spokesperson Mondli Mvambi said on the day, 31 people, including three children under the age of one, had to be transport to a health facility in Kroonstad through the department’s planned patient transport.

“We use the planned patient transport to transport patients to nearby hospitals that are far from health facilities.

“There were too many people for the planned patient transport vehicle so an ambulance assisted by transporting nine patients, including the driver and an additional three children,” Mvambi said.

While the two vehicles were travelling on the R76 to Boitumelo Hospital in Kroonstad, an oncoming vehicle collided with the ambulance, Mvambi said.

Bus with passengers catches fire on N1 North in Johannesburg

The crash happened after 6am.

“The planned patient transport vehicle, which was travelling behind the ambulance, then ploughed into the back of the ambulance.”

Three occupants of the car were declared dead, while a man and child survived the crash and were transported to Pelonomi Hospital in Bloemfontein. They were in critical conditions.

All the patients from the ambulance were treated for minor injuries and shock, and had been discharged.

Mvambi said the 20 people from the planned patient transport vehicle were also treated for minor injuries and shock.

An emergency official had to be extricated using the jaws of life and was flown to Union Hospital in Alberton.

A case of culpable homicide had been opened.

Three people lost their lives in an accident involving a truck and bus on the R573, better known as Moloto Road, outside Pretoria on Monday.
News
1 year ago

Five killed in horror crash on N14 in Centurion

Four children and an adult were killed in a horrific collision on  the N14 near the Wierda onramp in Centurion on Saturday afternoon, paramedics said.
News
1 year ago