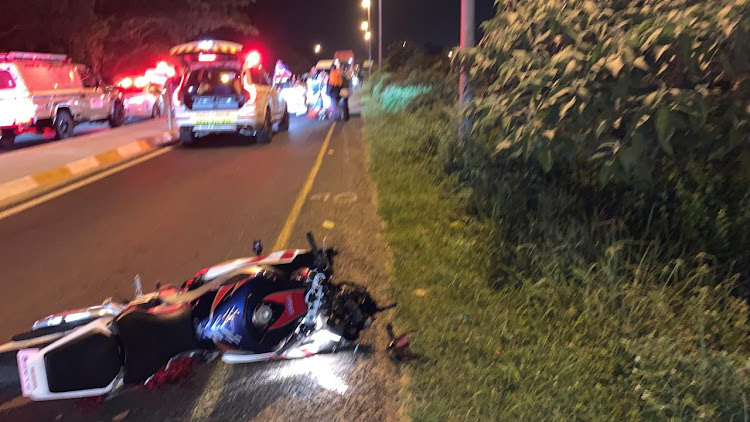 A biker is in a critical condition after a crash near Zimbali, north of Durban, on Saturday night.
Image: IPSS Rescue

A biker was in a critical condition in a Durban hospital after losing his right leg in a horror crash on Saturday night.

IPSS Medical Rescue's Dylan Meyerick said that the accident took place on the M4 freeway near Zimbali, north of Durban, on Saturday night.

The bike "lost control of his bike before colliding with a chevron sign", he said.

"The rider sustained a traumatic amputation of his lower leg," added Meyerick.

He was taken to hospital in a critical but stable condition.

The man's leg was later recovered in the bushes and taken to the hospital - but whether the limb could be salvaged was unknown.

One person was killed and three others injured when a vehicle rolled down an embankment and landed on a railway line near KwaDukuza in KwaZulu-Natal ...
News
2 years ago

Three people, including a young girl, died after their car collided head-on with an ambulance on the R76 near Kroonstad in the Free State on Wednesday
News
2 years ago