Karoo telescope sees what used to be infinity ... and beyond 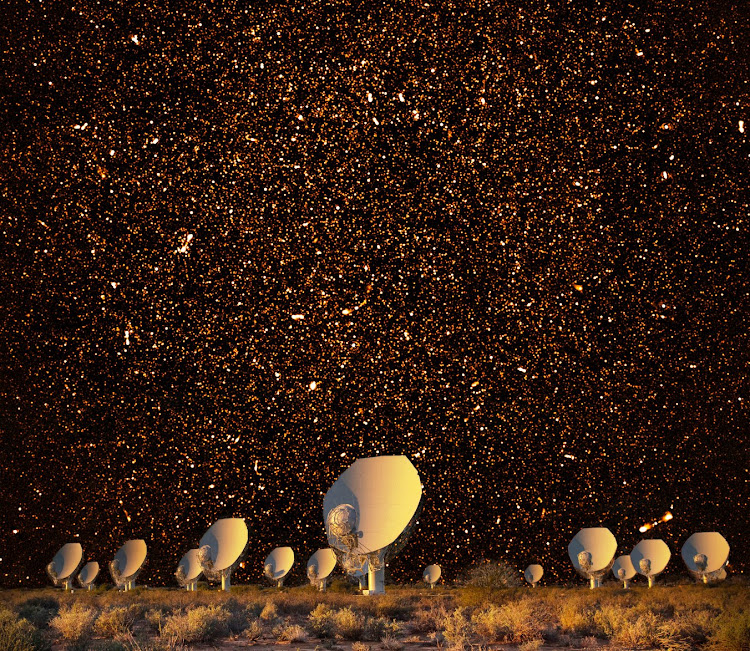 Thousands of galaxies are visible in this radio image covering a square degree of sky near the south celestial pole, made by the MeerKAT radio telescope array (foreground) in the Karoo.
Image: South African Radio Astronomy Observatory

The MeerKAT radio telescope in the Northern Cape has produced the first image of thousands of distant galaxies like our own.

Each of the dots in the composite above, which combines the telescope array near Carnarvon with the image it has produced, is a galaxy. The brightest spots are galaxies powered by supermassive black holes.

“To make this image, we selected an area in the southern sky that contains no strong radio sources whose glare could blind a sensitive observation,” said Tom Mauch, of the South African Radio Astronomy Observatory in Cape Town.

Mauch led the team whose research has just been accepted for publication in The Astrophysical Journal under the heading “The 1.28 GHz MeerKAT DEEP2 Image”.

On course to becoming an astronomer from the Karoo, 21-year-old Janethon de Klerk’s journey has not been smooth sailing. After growing up with her ...
Features
4 years ago

It has been difficult for astronomers to study the faint light coming from the so-called “cosmic noon” between 8-billion and 11-billion years ago when most stars were born.

But until the 2018 commissioning of MeerKAT — forerunner to the Square Kilometre Array — they have not been sensitive enough to detect the signals from distant Milky Way-like galaxies that are responsible for most of the star formation in the universe.

Mauch’s team used the 64 MeerKAT dishes to observe an area of the southern sky about the size of five full moons for a total of 130 hours. The resulting image shows tens of thousands of galaxies.

Co-author James Condon, of the National Radio Astronomy Observatory in the US, said: “Because radio waves travel at the speed of light, this image is a time machine that samples star formation in these distant galaxies over billions of years.”

How world-leading MeerKAT telescope will benefit the San

It was a giant leap for astronomy and our understanding of the universe when the MeerKAT telescope was unveiled in the Northern Cape this week.
News
4 years ago

The astronomers want to use this image to learn more about star formation in the entire universe. “These first results indicate that the star-formation rate around cosmic noon is even higher than was originally expected,” said Allison Matthews, a PhD student at the University of Virginia in the US.

South African Radio Astronomy Observatory chief technologist Justin Jonas said: “MeerKAT is the best radio array in the world for studies like this one because it is the first to use such a large number of extremely low-noise, clear-aperture dishes.”

As a result, the MeerKAT image is more sensitive to distant star-forming galaxies than any previous view of the radio sky.

It has been a decade in the making‚ and now the MeerKAT radio telescope has been unveiled.
News
4 years ago

One of the world’s largest collaborative science projects is about to enter its most exciting year yet.
News
4 years ago

We're reaching for the stars‚ Mabuza says at MeerKAT launch

Deputy President David Mabuza had his eyes on the local‚ global and virtual at the launch of the world’s largest radio telescope‚ the MeerKAT‚ in the ...
News
4 years ago