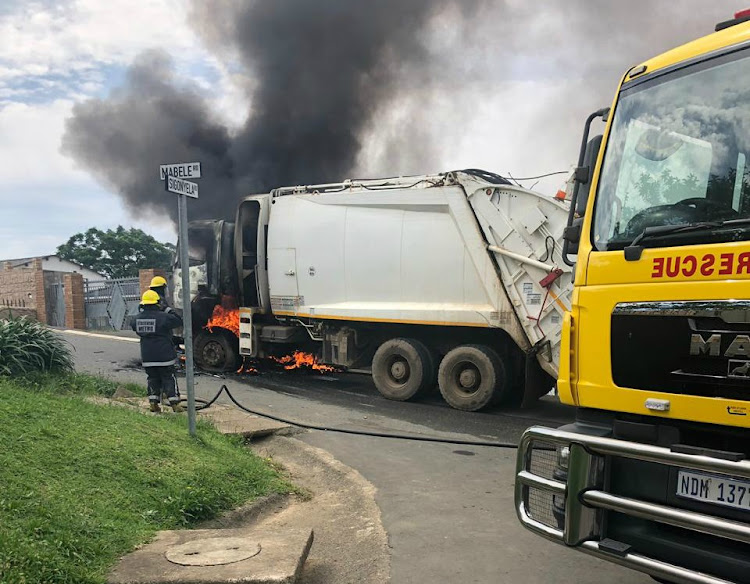 Fire services have responded to a truck that was set alight in Umlazi, south of Durban, on Monday morning.

Plumes of smoke from the burning refuse removal truck at the corner of Mabele and Sigonyella roads in K section billowed above homes as firemen worked to put out the blaze.

“Two unknown people approached the driver of the truck. They were chatting to the driver. They then threw a petrol bomb.”

Sewpersad said a case of arson was being investigated and police were searching for the two men.

Umlazi has been plagued by refuse removal disruptions and protests in recent months.

On December 11, the municipality issued an apology to residents in the township affected by the refuse collection service.

The city said it had temporarily hired 12 private trucks to fast-track the clearing of the refuse collection backlog from Monday.

“This is the interim arrangement while the city waits for its own compactor trucks. These private trucks are solely complementing the current city’s workforce that is collecting refuse in the area.

“The city would like to assure residents of Umlazi that this arrangement is aimed at ensuring that residents have access to quality service delivery. This must not be misconstrued as outsourcing as the city has taken a decision to permanently insource this much-needed service.”

Ethekwini mayor Zandile Gumede dismissed to 'save Durban for ANC'

Ethekwini mayor Zandile Gumede had to be dumped because outraged voters in the metro were losing faith in the ANC over her failure to deliver basic ...
News
2 years ago

For over a month, rubbish overflowed from green garbage skips all along Sheffield Road, which runs past Rholihlala, Marikana 1 and Marikana 2 ...
News
2 years ago