The KFC proposal: how it went viral, SA’s support and the wedding 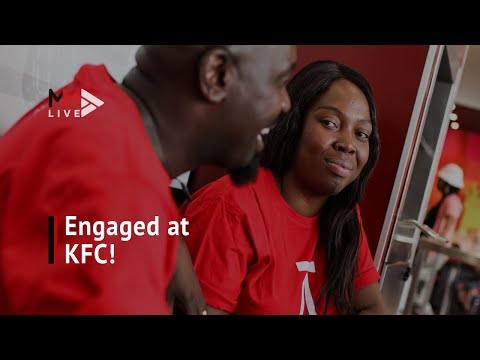 In the history of viral stories, the KFC proposal surely makes it up there with the best to ever come out of the internet.

Not only was it buzzing nationally, but the proposal also made world news, proving once again that humans love LOVE!

It all started when KFC picked up on a video  posted on Instagram by Kateka Malobola, who witnessed and filmed the romantic scene at Evaton Plaza.

The fast-food restaurant then called on Mzansi to help find the “beautiful couple”.

The couple issued a statement to SowetanLIVE, saying they fell in love in 2010, began lobola negotiations in 2011, married in 2012 but never had their dream wedding or rings that were satisfactory.

The groom, Hector Mkansi, said: “I decided to come to KFC to give her a small surprise with a meal.”

He arranged for KFC staff to bring the food out with the ring, and he then “went on my knees”.

A call to “bless” the couple soon turned into a massive outpouring as the whole country united warmly in the spirit of donating their services.

Brands like Audi and Lexus have offered to help the couple with travel. Airlines Mango and kulula have both pledged to fly the couple to their desired honeymoon destination — whichever one of TsogoSun or Sun City, among others, they choose.

Musician Zakes Bantwini gave his support, offering to perform at the wedding for free. DJ Fresh offered to donate DJ equipment for the reception.

The beloved couple, Nonhlanhla Soldaat and Mkansi, will tie the knot on December 31, just in time for the new year.

Popular event planner Precious The Planner announced that she had met the couple and confirmed that arrangements for the wedding were under way.

Wedding Planner to the National Couple 🥰 The date is set🥂 @KFCSA reached out to me at the request of the couple. I met with Bhuti Hector & his lovely wife Sis Nonhlanhla today🌿 Wedding planning underway, I can’t wait 🙏🏽#KFCProposal #StreetwiseWedding #precioustheplanner pic.twitter.com/fsYvSC8vF2

Soldaat told TimesLIVE she wanted to feel like a princess on their special day.

“It’s so hard to say what I want because growing up, my image of a perfect wedding was when a girl felt like a princess walking on glass in a beautiful gown. It would be great if I could wear a gown that’s not white because I’ve done that already,” she said.