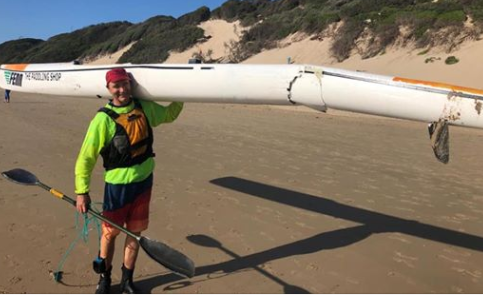 Paddler Roger Swinney who was attacked by a shark at Nahoon Beach on Thursday.
Image: Facebook / Caron Williams

It's not every day that a person has a close encounter with a shark and lives to tell the tale.

TimesLIVE on Thursday spoke to Roger Swinney, a paddler who survived a shark attack  off Nahoon beach in East London.

He said he would be taking a break from paddling in those waters.

“I think I will paddle on the river for a little while but I will go back. I love paddling, it's my sport. And you can’t live in fear all the time,” said 58-year-old Swinney who has been paddling since his teens.

Speaking to TimesLIVE hours after the incident, he admitted he was still shaken by the experience.

“I was quite calm when it happened. I don’t know how I was so calm.  Only when I got to the beach, it kicked in. I was quite amazed [at what had just happened],” Swinney said.

He was paddling in the sea at about 7am when the attack took place.

Nahoon Beach has been closed to beachgoers after a shark attack early Thursday.
News
1 year ago

“The shark came up and bit the back of my ski.  It left a 40cm gaping hole in my boat,” Swinney said.

The impact of the shark lodging its teeth into his boat knocked him off it and into the water.

“I got back on and then I saw the shark — just the points of the fins,” he said.

“I didn’t know if it was coming back to me,” he added.

Swinney tried several times to get back onto his ski but as it filled up with water, he was forced to seek help.

“I paddled towards my son who was 50m behind me.  My boat was sinking slowly and  I couldn’t paddle it,” he said.

“I shouted, 'Shark!' to my son [Luke]. He was very brave. He told me to get onto the back of his ski and he paddled us to shore,” said Swinney.

Other paddlers managed to recover Swinney's damaged ski and  bring it ashore.

Swinney said he was aware that there had been shark attacks at the same beach before.

“Some surfers have even died,” he said, adding that this would not deter him.

Meanwhile, the Buffalo City municipality closed the beach shortly after the attack.

City officials would monitor the area, it said.

The National Sea Rescue Institute (NSRI) is appealing to beachgoers to only swim at beaches protected by lifeguards.
News
1 year ago