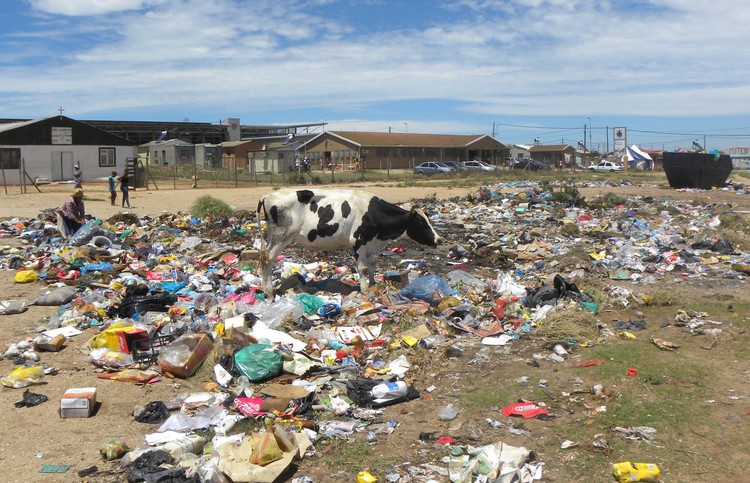 Dump sites in NU30 in Motherwell have been cleared following the death of four children, apparently after eating toxic food. Others, like this site in NU10, have not been cleared.
Image: GroundUp/Joseph Chirume

The Nelson Mandela Bay municipality has blamed residents for illegal dumping after the deaths on Sunday of four children, apparently after eating toxic food from a nearby dump site.

Residents of NU30 in Motherwell blamed the municipality for the dump site after the deaths at the weekend of Asive and Alizwa Rhwayibana and Alunamda and Zintle Mqawu. The dump site is about 100m from the children’s shacks.

In response, municipal spokesperson Mthubanzi Mniki told GroundUp the municipality always cleaned dump sites in all areas of the municipality. He blamed residents for illegal dumping.

“We always clean all dump sites. The problem is residents continue to dump, even in places where there are skip bins provided. People throw their waste outside the bins, even when they are not full. We urge them to dump in those bins to curb health hazard cases.”

Four children have died after they consumed a toxic substance at a dump site in Port Elizabeth, Eastern Cape, police said on Tuesday morning
News
2 years ago

But there are no skips in NU30 - and no rubbish collection services. Residents say the dump site has never been cleared.

However, on Tuesday municipal trucks cleared all the dump sites in NU30.

The mother of Asive and Alizwa, Nomthandazo Rhwayibana, said she feared that dumping would continue even after the clearing of the site because no skip or refuse bags had been provided.

Meanwhile, a resident of Motherwell NU10 pointed out that the dump site opposite the local clinic had not yet been cleared.

Police spokesperson Capt Andre Beetge said autopsies on the dead children’s bodies had been done on Wednesday. “Toxicology tests were done and samples sent to Cape Town. Cause of death will be then determined by the doctor.”

Rubbish is piling up on the corners of streets in Nelson Mandela Bay, next to clinics, hospitals, churches, schools, initiation schools, roads, dams ...
News
2 years ago

Nelson Mandela Bay Municipality in the Eastern Cape is struggling to clear dumping sites. Residents say they have no option but to dump rubbish in ...
News
3 years ago

As sewage continues to spill into the Midmar Dam in the KwaZulu-Natal Midlands, water authority Umgeni Water has said that communities who dump trash ...
News
2 years ago