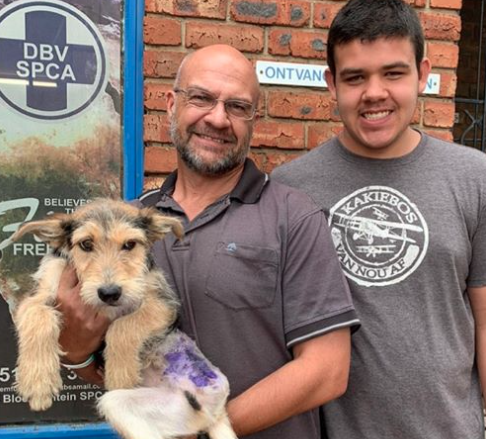 Rover, the terrier cross whose leg was snapped in half, allegedly at the hands of a Bloemfontein teenager, has found his forever home.

The Bloemfontein SPCA shared the details of Rover's rescue in December, describing how officials received complaints about a dog screaming in pain.

The SPCA's Duane Matthee told TimesLIVE the dogs leg had to be amputated after it was snapped in half, allegedly by a teenager who wanted to test his strength.

The puppy had to have its leg amputated.
News
2 years ago

The organisation appealed for funds for Rover's amputation and said it was overwhelmed by the outpouring for support for the dog.

On Facebook, the SPCA said Rover was adopted by Japie and Marno Victor, later adding a video of Rover running happily in his new home.

All the damn feels.

Barely a month after a Soweto property owner was convicted for ill-treating 32 dogs found in dire conditions, more animals were found caged and ...
News
2 years ago

A policeman stationed at King Shaka International Airport has appeared in court on charges relating to the fatal shooting of a much-loved cat outside ...
News
2 years ago

Fall in love with some our country's most delightful SPCA animals; these furry life companions will always live up to their Tinder-like profiles
Lifestyle
2 years ago