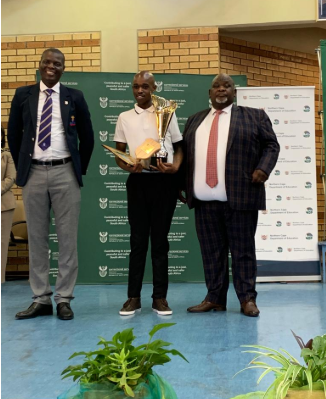 The prisoner who achieved the highest marks after writing his 2019 final matric exams obtained four distinctions, the department of justice and correctional services said on Thursday.

His name is Sandile Stangoni and is serving time at a prison in Durban. He studied and wrote his exams through the Usethubeni Youth Centre.

His average was 76.5%, with distinctions in English, maths literacy, life orientation and tourism,” said minister of justice and corrections Ronald Lamola on Thursday.

Lamola was announcing how the prisoners who had written their exams fared, at an event held at the Tswelopele Correctional Centre in Kimberley.

“The second-best offender learner is Mandla Malwande from Cradock Prison School in the Eastern Cape region, with an average of 76.4%. He registered three distinctions, in isiXhosa, life orientation and business studies,” Lamola said.

Third was Thamie Ganto, also from Cradock, with distinctions in isiXhosa and history.

The department had announced that 82.6% of inmates who wrote the 2019 matric exams passed. This was an improvement on the 77.3% pass rate prisoners achieved the year before. 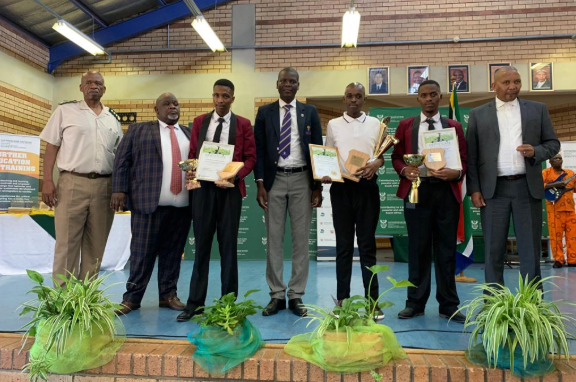 The top three performing prisoners were honoured at an event in Kimberley on Thursday.
Image: Supplied / DCS

While the department had expected 212 inmates to write the exams, the DCS said that in the end 161 full-time candidates sat. One hundred and thirty-three offender learners had passed, while 65 had achieved bachelor passes, 39 had achieved diploma passes and 28 higher certificate passes.

Lamola said it had been smooth sailing for schooling inmates last year.

“We had a relatively stable 2019 academic year, with fewer disruptions of teaching and learning as a consequence of co-operation and understanding within our correctional facilities on the importance of education by the offender population. For that we are all grateful,” he said.

“Once again, we have delivered incident-free 2019 matric examinations with no systematic irregularities that undermined the integrity and credibility of the exam processes. Today’s announcement, yet again, confirms our commitment to advance the values of education,” Lamola added.

Asked how many of the jailed matriculants were female, the DCS said none.

“None of the females were studying as full-time students,” the department said.

Drug mule Nolubabalo Nobanda out of jail, with a degree and a recipe

Almost eight years ago Nolubabalo Nobanda tried to smuggle cocaine hidden in her dreadlocks into Thailand.
News
2 years ago

Halala or hogwash: schools of thought on matric

Did the results make you shout in celebration or groan ‘ho hum’? Or is it a case of the class half full?
Ideas
2 years ago