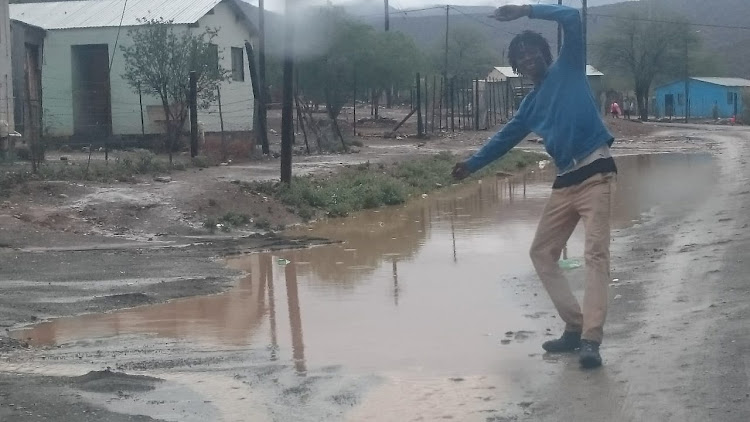 Residents of Graaff-Reinet were overjoyed after recent rainfall in the town.
Image: Mervin Mackelina

Hope. That’s what this week’s rainfall brought to residents in drought-stricken towns of the Karoo.

Recent rains have brought joy and some relief to residents in Graaff-Reinet and surrounds in the Eastern Cape this week.

“When that first thunderstorm came pouring down, I ran out to the streets and looked to the heavens and thanked God. I was soaking wet from top to bottom but it was an amazing feeling,” local resident Mervin Mackelina told TimesLIVE on Thursday morning.

This week, “a good amount of rain” had fallen over the central parts of SA, bringing relief to the hinterland.

Mackelina said the storm “caused a little bit of damage to some infrastructure and some houses were flooded but I think people were just happy for the rain”.

“For the first time after very long, I had to run to close windows and stuff around the house,” the schoolteacher said.

Mackelina said after the rain subsided, children flocked to the streets and had “huge fun” in the puddles of water.

“All you could see was smiles as children played in the pools of water. We haven’t experienced a feeling like this in such a long time.”

The SA Weather Service said on Thursday morning that more rain was expected across parts of the Eastern Cape this weekend.

A second resident, Chady Boggenpoel, told TimesLIVE that during the festive holidays there was only a small glimpse of hope that it would rain.

“There were clouds but the wind would blow them away behind the mountains. All we wondered was, ‘is it going to rain or is it not going to rain?'” Boggenpoel said.

Boggenpoel said water was limited after the town’s main water supply had dried up.

She said their geyser at home had been off since October.

“For a week we will have no water and then the water will come back for a day or two before it goes off again for another week.

“The only time we really had water was a few days before Christmas, then we were able to fill our bathtubs and buckets to save water.

“The rain brought relief and we are extremely overjoyed.”

Lindy Hendricks, who lives on a farm between Graaff-Reinet and Aberdeen, said the hearts of farmers were “jumping for joy” after recent rains.

“For too long we had to watch animals die because of the drought and watch our dams on the farms dry up.

“Two weeks ago we saw how a cow died but dams on the farms are full again.”

On Thursday morning, several videos and pictures had been shared on social media of locals bathing in puddles of water.

James-Dean Smith from Jansenville, who captured one of these videos, said he was on his way back from Graaff-Reinet when he saw a horse along the road.

“It is absolutely heartbreaking to see a horse walking and you can visibly see his rib cage and he is thirsty and hungry.

“When it started raining two days ago, I looked to the heavens and just said, 'thank you Lord for the rain', because I knew that horse I saw would find a puddle to drink from. It is quite an emotional thing.”

"If the river was running, Dad would never have done it."
News
1 year ago

Smith, who manages Usave in the town, said he was standing outside the shop capturing footage of the rain when Thobile Maerman, a local municipal official, arrived.

“Maerman told me that he put up a status on his WhatsApp where he asked God to bless the town and farmers with rain, and in return he would thank God and swim in the rain in front of Usave. He did it, and that is something that touches someone even more.

“We need to realise that we need to start appreciating water even more.”

Wandile Sihlobo, chief economist of the Agricultural Business Chamber of SA, warned that some showers would not significantly change things in hard-hit towns.

“My sense is that areas in the Northern Cape and central Eastern Cape are not in good shape. They might have received little showers over the past few days but you need continuous rain because of the severity of the dryness,” Sihlobo said.

He said below-normal rainfall would put towns across the country in “bad shape”.

The towns in the area that were doing “better” were those bordering Mthatha and leading to Durban, said Sihlobo.

#ECRain These pics of the Nqweba dam near Graaff Reinet were taken on Thursday morning following 3 days of good rain which fell in the nearby town.
Graaff Reinet was hit by a violent rain and hail storm on Wednesday afternoon and received 41 mm of rain since Monday @ReenvalSA . pic.twitter.com/DyfrubqZdc

The Western Cape department of local government has delivered 90,000 litres of water to a drought-stricken region in the Karoo.
News
1 year ago

The climate crisis is upon us, and South Africans need to act urgently

Victory in the Rugby World Cup made us all proud to be a winning nation. But SA is also a frontrunner in its development of a climate justice ...
Opinion & Analysis
1 year ago

More than 50,000 cattle succumbed to drought and disease this year, and breeders are pointing the finger at corruption and the government's failure ...
News
1 year ago
Next Article