Thabiso Molefi ran away from home at 14. Five years later he swam from Robben Island to Blouberg 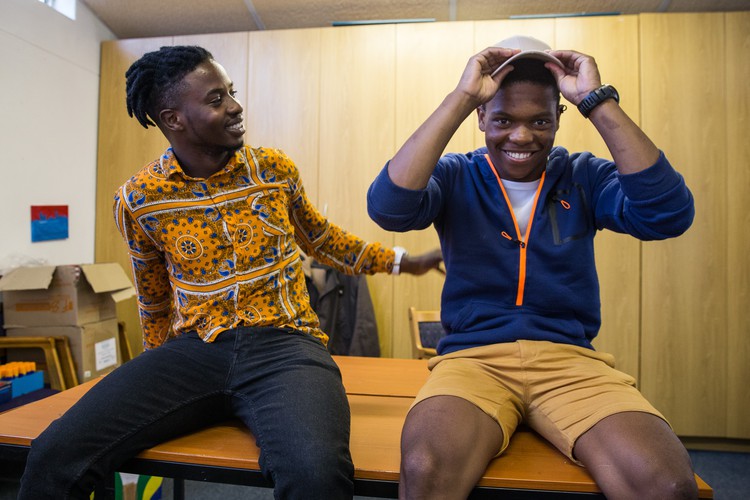 Thabiso Molefi ran away from home and hitchhiked from the Free State to Cape Town in 2014. Only 14, it took him months to hitchhike to the Mother City.

When he arrived, his first stop was Lagoon Beach in Milnerton. He couldn’t swim but  took off his clothes and “just went to play around in the water”.

Five years late he completed the 7.5km open water swim from Robben Island to Big Bay on his first attempt.

Molefi was born in Welkom, Free State. His parents were immigrants from Lesotho and family life was hard with his parents often absent. His father was arrested, although Molefi doesn’t know why. He also had to look after his younger brothers.

Molefi wasn’t registered at birth and does not have a birth certificate. He does not officially exist so when he arrived in Cape Town, he was unable to register for school.

“I ran away from my parents to get a better life,” he says.

For two weeks after arriving in Cape Town Molefi was homeless and relied on strangers to survive. He met a woman, and with her family’s assistance he was given new clothes and was taken to the Homestead Project for Street Children, an organisation that provides a safe space for street children.

At Homestead he met Arafat Gatabazi, a refugee from the Democratic Republic of Congo,  who was formerly homeless himself and had also previously been taken in by Homestead. In 2017 Gatabazi swam from Robben Island to Sea Point. He now runs a swimming programme for Cape Flats children.

“The idea of the programme is to try to inspire” says Gatabazi. “Swimming helped me deal with my problems.”

He says when you’re going through difficult times, being alone in the water clears your mind.

Gatabazi wants to help boys and girls see the world differently. The ocean “doesn’t allow you to come with your negative energy in it,” he says. “When you go in it, it’s as if you just left everything outside.”

For many of the children staying at the Homestead, life on the streets was hard with a lot of negativity. That is why a programme where someone believes in you is important, Gatabazi says.

Molefi joined the swimming programme in 2016 and Gatabazi coached and mentored him.

Many of the boys come from chaotic pasts, dealing with drugs and gangs.

“You can’t be sitting calmly in a circle talking about things when you’ve been living your whole life on high adrenaline,” says Liezl Conradie, manager and social worker at the Homestead Project. “Once they get into sports that are high adrenaline, like open water swimming, it almost replaces that.”

Conradie says the swimming programme dramatically changed the lives of both Gatabazi and Molefi.

Molefi loves the sport because “it is simple”.

“I forget about everything and I focus on where I am going.”

Molefi trained three to four times a week for the open water swim from Robben Island. He would use a tidal pool and the public swimming pool in Long Street to swim two to three kilometres daily.

On 5 January he swam from Robben Island to Big Bay in three hours and four minutes in water that was about 13°C.

He says the hardest part of the swim was to “not to focus on negative thoughts”. During difficult parts in the swim, Molefi would imagine his coach next to him and he would try to keep up.

Molefi says that he is proud of himself for completing the swim.

“I never believed that I would do it.”

Even though he has had a difficult past, he says “I am able to do something different”.

In January last year he went back to Lesotho to sort out his birth documents. This year, at the age of 19, he is back in school to complete grade 11 and is helping Gatabazi teach at the swimming programme. Molefi wants to become a social worker. Because of what he has been through, he believes he’ll be good at it.

They might not have much, but pupils at Eersterivier Secondary School have cultivated a proud culture of giving.
News
2 years ago

The birth of a rhino calf — a descendant of Bella, a rhino poached  less than two years ago — has been welcomed at Kragga Kamma Game Park in Port ...
News
2 years ago

Hope. That’s what this week’s rainfall brought to residents in drought-stricken towns of the Karoo.
News
2 years ago