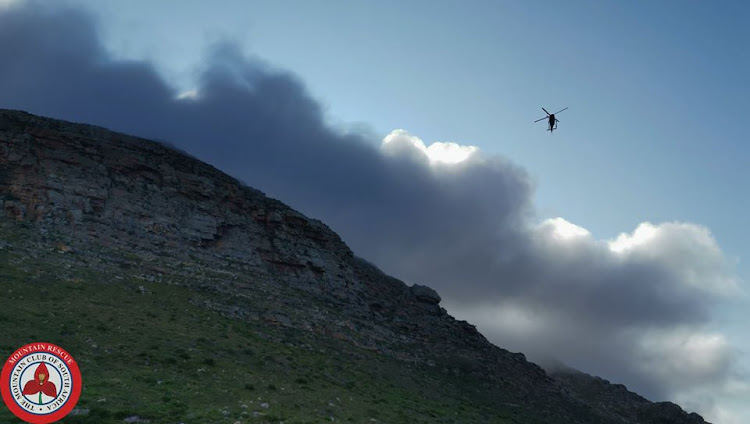 A climber died after a rock fell on him in Kalk Bay on Sunday.
Image: Mountain Club of South Africa Mountain Rescue

A climber believed to be in his 70s died on Sunday afternoon after a rock climbing accident in Kalk Bay in the Western Cape.

ER24 paramedics arrived on the scene at 3pm to find the Western Cape Metro Rescue, Life Healthcare and the Mountain Club of SA already in attendance.

"On the scene, medics and rescue personnel retrieved and stabilised the patient. Assessments showed the man had sustained several serious injuries and was in a critical condition," said ER24.

The AMS Medical Rescue Helicopter was called to airlift the patient from the mountain and deliver him to the ER24 ICU and Metro EMS at the roadside.

"Unfortunately, after a short time, the man succumbed to his numerous injuries," ER24 said.

"All I have heard is that a rock was dislodged and fell on the climber. The rest I don't know. It's a very unfortunate incident and we send condolences to his loved ones," Hutton-Squire said.

The man was a "well-respected MCSA mountaineer".

Respected rock climber David Wade was shot dead when he tried to help security guards during a robbery at an adventure farm in Waterval Boven, ...
News
2 years ago

A Johannesburg woman aged 41 fell to her death after a solo summit at Gray's Pass in the Drakensberg on Sunday.
News
2 years ago