Twerks and raunchy routine chase away couple on Durban beach 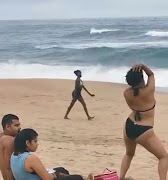 Image: via Facebook A woman walked up to a random couple on a beach south of Durban and started to swear, twerk and perform raunchy moves.

A couple enjoying the salty breeze and sunshine on Anstey's Beach, south of Durban, got more than they bargained for when a woman started to twerk in front of them.

A video, which shows a woman dressed in a black swimsuit going up to the two strangers and starting to dance provocatively, has gone viral on social media.

At first the couple sit through her bizarre routine, but when she becomes more provocative, they stand up, gather their belongings and leave.

The woman ends the routine by making the sign of the cross while the person recording the spectacle exclaims that she is Satan.

On Monday, a Facebook user posted on the Wentworth community group that her daughter had suffered a mental breakdown due to the negative attention as a result of the viral video.

She claimed her daughter was in hospital and that blood tests proved  she wasn't on drugs or drunk.

The woman removed her post after a few hours.

I'd like to apologize for sharing that video of the girl on the beach... I may not have did it on Facebook but I did put...

He called for friends to share his apology with the woman and her family.