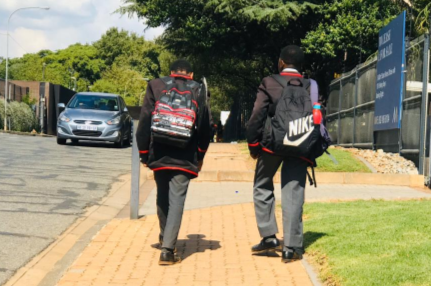 A relative of Parktown Boys' High pupil Enock Mpianzi, who died during a school orientation camp on his first day of grade 8, shrieked and broke down in tears as she entered the school grounds on Friday.

She was comforted by Gauteng education MEC Panyaza Lesufi who led her towards the administration block.

The relative had just driven to the school where several boys, dressed in black and red blazers and grey pants, stood around in groups.

This was the uniform that Mpianzi, who was fresh out of primary school, never got a chance to wear.

The 13-year-old who had just completed grade 7 at Brixton Primary School went missing after a raft he was on capsized on Wednesday.

His body was found on Friday at the lodge at Brits in the North West where he and about 200 other grade 8 pupils were attending the camp.

According to police, the makeshift raft that Mpianzi and other pupils built during an activity overturned, dumping them in the water.

His absence was only officially noticed early on Thursday.

Lesufi described on Friday what a daunting task it had been to recover the teen's body from the water.

“We are in pain. We are in a difficult situation,” he said.

“Where the children were, it feeds towards the dam. The police felt they need to reduce the dam levels and the flow of the [Crocodile] river so they can check if the missing child is in the dam. They unleashed all their resources. At around 11am, they said they felt they had found something,” Lesufi said.

“The body was found deep in the bushes. Police said it was fortunate that the body did not go into the dam ... We took the family to confirm and verify [that it was him],” he added.

“We were all devastated because we thought they would find him alive,” he said.

Telling Mpianzi’s family that the body had been found was traumatic.

“It was one of the most difficult exercises. Members of the family cried hysterically,” said Lesufi.

Parents of some of the Grade 8 pupils from Parktown Boys High School on Friday shared how their children had also experienced difficulties at an ...
News
2 years ago

It was not immediately clear whether Enock Mpianzi and other Grade 8 learners from Parktown Boys High who partook in a river-rafting exercise that ...
News
2 years ago