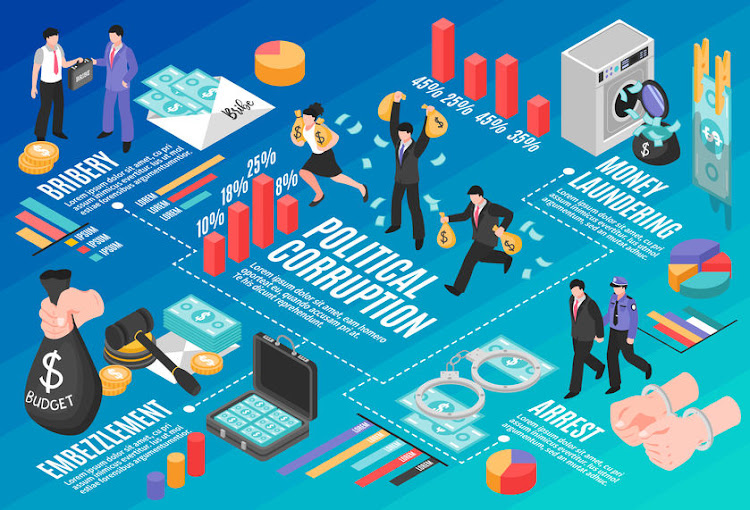 The Corruption Perceptions Index highlights the importance of the relationship between money, political power and corruption.
Image: 123RF/macrovector

Despite a marginal improvement in dealing with corruption, South Africa still languishes among many countries around the world that have a serious problem with graft.

That was the picture painted by the 2019 Corruption Perceptions Index (CPI), released on Thursday morning by Transparency International (TI), the global coalition against corruption.

The report ranks 180 countries and territories by their perceived levels of corruption in the public sector, according to experts and business people. It highlights the importance of the nexus between money, political power and corruption.

TI said more than two thirds of countries scored below 50 on the index, with an average score of 43. South Africa scored 44.

The mayor of the southern Cape town of George faces suspension by the DA over alleged corruption and interference in administrative processes.
Politics
1 year ago

"Similar to previous years, the data shows that despite some progress, a majority of countries are still failing to tackle public sector corruption effectively," states the report.

Countries ranked high in tackling corruption included New Zealand and Denmark, with scores of 87 each, followed by Finland (86), Singapore (85), Sweden (85) and Switzerland (85).

Among those at the  bottom of the pile were Somalia, South Sudan and Syria, with scores of 9, 12 and 13 respectively.

"Governments must urgently address the corrupting role of big money in political party financing and the undue influence it exerts on our political systems," said Delia Ferreira Rubio, chair of TI.

South Africa improved marginally from a score of 43 in 2018.

Parliament passed South Africa’s Political Party Funding Act in January 2019, but the president has yet to bring the act into operation

David Lewis, executive director of Corruption Watch, said: "The failure after a year to bring the Political Party Funding Act into operation does little to inspire confidence in the strength of government’s will to tackle corruption.

The new year has brought further woes for former eThekwini mayor Zandile Gumede. The cost associated with the corruption scandal in which she has ...
Politics
1 year ago

The CPI urged countries wanting to reduce corruption and restore trust in political leaders or those in public office to implement closer regulation of political party funding. It also suggested putting in place measures to:

“The toxic influence of money in politics would also be exposed and constrained [the government] were to commence with promised lifestyle audits of politicians and public officials, to introduce more stringent application of regulations governing asset and income declarations, and to require companies to identify their beneficial owners,” added Lewis.

A dossier of 715,000 leaked documents including emails, audits and accounts is piecing together the mystery behind Isabel dos Santos’ wealth.
News
1 year ago

The Zimbabwe Anti-Corruption Commission (ZACC) is preparing for a fresh start with the departure of its operational head, Silence Pondo.
News
1 year ago