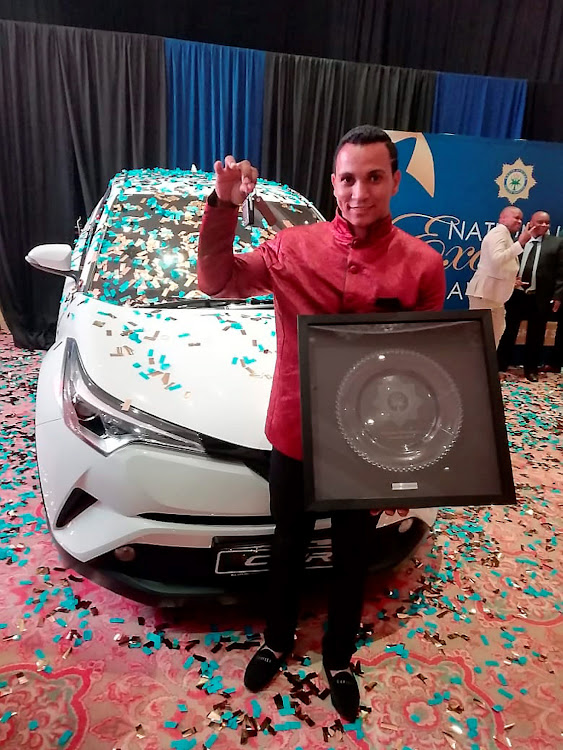 The Port Elizabeth police officer has, for the second time, won the police’s national award for his commitment and dedication to fighting crime across the province.

And this time round, Blundin, 33, also walked away with a new car.

He won the national Tracker Award and the National Man of the Year police awards in 2016/2017, making him a double award-winner.

The 2018/2019 awards were held at Boardwalk Casino and Entertainment World in Port Elizabeth on Sunday night.

Blundin has been with the police force for 13 years and is attached to Nelson Mandela Bay’s Flying Squad unit, reports HeraldLIVE.

“He recovered 56 vehicles that were hijacked, stolen or used in a crime,” he said.

During the same period, Blundin recovered suspected stolen property valued at about R1.8m, R210,000 in illicit money and drugs with a street value of R620,000.

In an interview on Monday, Blundin said: “I am still shocked that I won again.

“It is such an honour to win such a prestigious award in the police. It is such a great inspiration.

“I hope that this will encourage others to do better than me.

“The overall goal is to take criminals off the street so that we can all live in peace and harmony.

“That is what keeps me going,” Blundin said.

An employee has been arrested in connection with a cyber attack this week in which one of the department of employment and labour’s servers was ...
News
1 year ago

“I must say I am still in shock at winning a car (a Toyota C-HR) this time. My family is over the moon about it,” he said.

Blundin was a key player in tracking down guns stolen from a Port Elizabeth gunsmith late in 2018.

Some of the 169 firearms, stolen from Anthony Lombard's East Cape Gun Traders, were found after Blundin was involved in a shoot-out and car chase with gangsters in Bethelsdorp on January 18 2019.

During the shoot-out, one suspected gangster was killed when the car he was driving crashed.

A bag containing 18 firearms was found, sparking the probe.

Of the 18 guns, 11 were registered to the company, while others were private firearms placed in the care of the shop.

The recovery led to police shutting down the shop and confiscating 359 guns belonging to the company and private owners.

Since then, several of the stolen firearms have been recovered in the gang-ridden northern areas of the Bay and Western Cape.

Blundin also assisted by responding to the attack on the Ngcobo Police Station, between Mthatha and Komani, in February 2018, in which police officers and a soldier were gunned down.

Five members of the Mancoba Angels cult were arrested after a shoot-out with police days later.

National police commissioner Gen Khehla Sitole thanked Blundin for his contribution to the country and community.

“For this, we say thank you. We must, however, remain on a steadfast course on our journey to a safer South Africa,” he said.

The awards took place a day ahead of National Police Day, celebrated in the Bay on Monday.

It was during routine stop and search operations that police discovered the plight of 79-year-old Sisana Muad Mbinambina who lived in a one-room ...
News
1 year ago

Police rescued an e-hailing driver who was allegedly hijacked and kidnapped by armed men, south of Durban on Thursday night
News
1 year ago